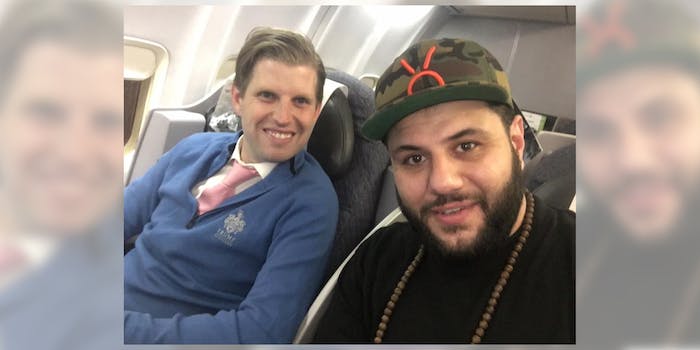 Dave Chappelle was brought into it.

Comedian Mohammed Amer was given some great material on a recent flight, courtesy of surprise seatmate Eric Trump.

The Muslim-American comedian posted to Facebook on Nov. 30, claiming he was “randomly” chosen to sit next to Donald Trump‘s son on a United flight to Scotland. “Good news guys Muslims will not have to check in and get IDs. That’s what I was told,” he commented.

Amer, who was born in Palestine but raised in Houston and is part of the comedy trio Allah Made Me Funny, was heading to Scotland to start a U.K. tour. He told BuzzFeed he couldn’t believe this was reality: “Is this a setup? I mean, I’m an Arab-Palestinian, everything is a conspiracy, right?”

He also said he asked Trump about his father’s plan to create a U.S. Muslim registry, and his alleged response is pretty chilling: “You can’t believe everything you read. Do you really think we’re gonna do that?” Amer’s 2015 standup special, Legally Homeless, addressed immigration, racial stereotypes, and identity.

According to an interview with Quartz, Trump also asked Amer to tell Dave Chappelle to “take it easy” with jokes about his family, perhaps in reference to Chappelle’s recent SNL monologue. Amer replied, “It’s our job essentially to scrutinize the king.” (Amer has also opened for Chappelle.)

Trump reportedly ordered a pork chop but never ate it because he fell asleep.