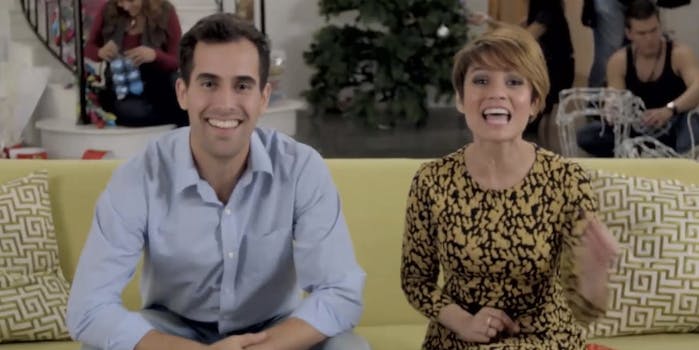 MiTú makes a name for itself in Latino creative community

The popularity of the MiTú Holiday House underscores the importance of the often-ignored Latino millennial market.

With a startling view of all of Los Angeles, Maiah Ocando and Daniel Fernandez, two of the most popular and influential Latino digital stars, are getting a crafting lesson at a private house in Bel Air, surrounded by cameras.

Liz Rangel is the 20-something mastermind behind the Craftingeek channel with 1.5 million subscribers, but this is her first trip to L.A. And if you don’t speak Spanish, it might be difficult to follow along with her tutorials unless you turn on captions.

Rangel, Fernandez, and Ocando are all part of the growing Latino millennial demographic. On the set, they banter back and forth in a mixture of Spanish and English, setting up for a quick segment on gift wrapping, highlighting the status quo of the Latino demographic. They’re both a part of broader culture, but they also have their own defined cultural norms and points of view. According to a report by marketing firm 360i, Hispanic influencers are 37 percent more likely than the general population to publish content to the Web, and they are highly motivated by cultural ties to share content online, especially in Spanish. Additionally, according to a Univision Consumer Insights Research report, Hispanic millennials feel a strong desire to remain connected to their cultural heritage, through language and other means. However, at the top-tier mutlichannel networks like Maker Studios or Fullscreen, Spanish-speaking or Latino creators aren’t taking center stage.

Luckily, digital network MiTú is filling in the gaps.

Husband and wife team Doug Greiff and Beatriz Acevedo founded MiTú in 2012 when they realized there was no version of a multichannel network for the Latino audience.

“Before MiTú we’d get this question all the time: ‘Oh, we’re Levis, we’re a youth-oriented brand, and we’re happy to be at this network, but let’s be honest, kids aren’t watching TV. Where would you go digitally that’s the hub for Latinos?'” Acevedo explained. “Or the question, ‘What’s the Machinima for Latinos? What’s the Maker for Latinos?’ and we kept thinking, ‘This must exist!’ But we researched, and there was nothing. The creators had huge, loyal audiences, but they weren’t making a living off just AdSense. Connecting them with brands has made a huge difference.”

MiTú is more than just for the brands, though. According to Acevedo, traditional Hispanic media content skews older, with the focus on traditional news, soap operas, and sports. For audiences craving counterprogramming—and digital content—there was a gaping hole. With MiTú, putting that sort of content under one roof makes it easy for audiences, and it makes it easier for creators to start cross-promoting, which is what led to their newest idea: the Bel Air holiday house.

They had tried out a more limited version of a collaborative house in the summer with a beach house concept just for YouTubers. But when November rolled around, Greiff and Acevedo decided to tackle the holidays and quickly snapped up a an Airbnb property in Bel Air that they could transform into a variety of sets over a long weekend, enough to fuel content for their channel and their creators for the entire month of December.

“We felt like this could be a meeting place for Latino creators from all different platforms to come, hang out, cross-promote and make content for themselves and for MiTú,” explained Greiff on the final day of filming. “It’s exciting to see it actually happened!”

“This is like our mini YouTube Space,” continued Acevedo. “We were excited to see the diversity of the collaborations. I think there’s a lot of misconception; people think, ‘Oh, this is a place where people only speak Spanish.’ But you see DeStorm next to SupereeeeGo. They’re so different; they’re so diverse. A girl from Venezuela can be as excited about see DeStorm as a girl from L.A. Already our audience are fans of these creators, who some are Latino and some are not, and it’s really nice to see them come together. And that’s the reality of our country. Latinos play a major role, but Latinos don’t only hang out with Latinos.”

“All the non-Latino influencers wanted to collaborate with the Latino ones,” adds Grieff. “They realize there’s a chance to appeal to a different audience. We’re really pleasantly surprised how many people wanted to stop by.”

More than just the audience has come running to MiTú. The company has worked with many brands as well.

“We have done a tremendous amount of work in the last year with blue chip brands that come to us and want to appeal to Latino millennials, from Pepsi to Nestlé,” said Greiff, who also mentioned a partnership MiTú has with Maker Studios to help satisfy client requests for the Hispanic market. “We have the top Latino creators and influencers, and MiTú is slowly starting to own Latino social influence across the board. It’s a valuable thing; it transcends YouTube to politics or box-office sales.”

For brands, it’s not simply about making Spanish-language content, but about understanding the culture of Latinos. That has served MiTú well, as it has found some Hispanic content creators aren’t feeling well-served in deals with more general-focused MCNs. Acevedo even laughingly explained that some creators come to them asking for help to get out of their existing contracts, just so they can join MiTú and see more focus and more results when brands come knocking.

“Culture being the key is really important,” Greiff said. “That’s what people respond to. There’s been a large group of influencers over the last year and a half [who] come to us and say, ‘They don’t get me; they don’t speak my language, my cultural language.’ Unless Hispanic is your focus, it’s hard to do a good job at it. Every media company and entertainment company out there is trying to appeal to Latinos. They have the -mundo or the -familia or -Latino. They’ll assign a junior Hispanic ambassador to the community. People see through that; they know they’re not really focused on it. That’s our sole focus, and I think that’s really helped us.”

At the end of the day, MiTú isn’t just the go-to home for Latino influencers and fans; it’s also a reflection of the diversity and eclectic tastes of a new generation. In the crafting segment, there’s a quick appearance from Santa, and the stars do exactly what you’d expect—demand a selfie. There’s no great digital divide between Latino youth and the rest of the millennial generation. They’re all looking for content that speaks to them in their language, be that Spanish, English, or emoji.

“We are interested in building a brand,” explained Greiff. “There’s hasn’t been a lot of reinvention in Hispanic media in the last I don’t know how many years. Who’s going to be a partner with these new entrepreneurial creators who are looking for opportunities and for someone to guide them?”