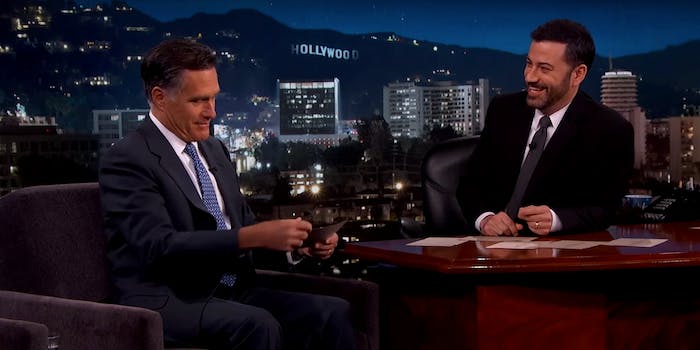 And to think, these are just the ones that Kimmel's people cleared.

After Mitt Romney took a page out of John Oliver’s book and slammed Donald Trump in a speech, the former Massachusetts governor tried to do the next best thing to bring down the Republican frontrunner: take himself less seriously.

Like President Obama before him, Romney read some of the terrible things people have said about him on Twitter recently. But instead of selecting a wide variety of insults past and present, Jimmy Kimmel drew from the very specific yet vast subcategory of mean tweets from Trump and his supporters.

They’re tame compared to some of the tweets Romney is probably getting on an hourly basis now, but he has a good sense of humor about them and even manages to make some jokes along the way. Given Trump’s reputation for having thin skin, we expect Romney might get a critique of his jokes rather soon.

Based on how previous efforts to dethrone Trump have gone, this will probably only make his poll numbers grow.