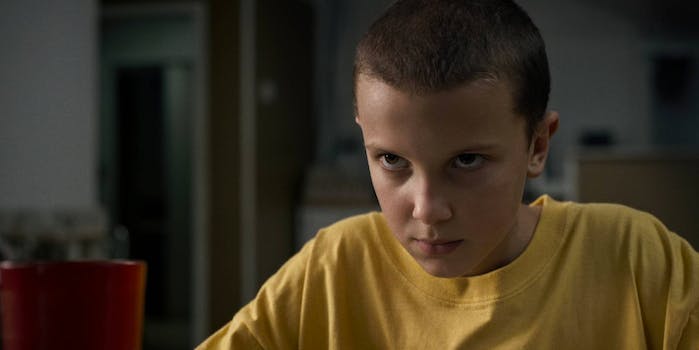 And we still want to look at Tom Hardy.

Who is Millie Bobby Brown? Apparently a lot of people were wondering this year.

Brown, who plays Eleven on Netflix hit Stranger Things, made IMDb‘s list of most viewed celebrities this year, coming in at No. 3 after Game of Thrones‘ Emilia Clarke (No. 2) and Suicide Squad‘s Margot Robbie (No. 1). Internet-breaker Tom Hardy and Deadpool star Morena Baccarin made the top 5.

Season 2 of Stranger Things is set to debut in 2017, but Brown’s IMDb credits will no doubt expand beyond the series in the next few years. Keith Simanton, IMDb’s senior film critic, noted of the female-heavy top 10 most-viewed list:

“These actresses are portraying remarkable female characters at the center of movie action this year, often protagonists in genres where women just didn’t excel before: action, comic books, and sci-fi.”