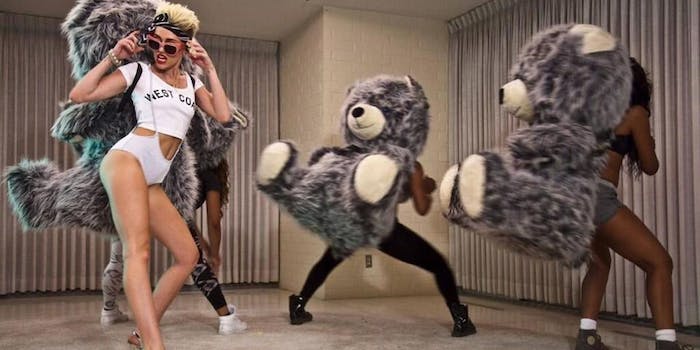 This twerk-for-the-camera campaign is sure to result in a few school suspensions.

Pop goddess Miley Cyrus has a new song out. It’s an edgy, somewhat celebratory tune about partying and it’s called “We Can’t Stop.” In three days on YouTube, the song has already collected more than 3.7 million views.

Those 3.7 million views exist only for an audio version; Miley’s official music video comes later. To make it, however, she’s turning to her hordes and hordes of fans to help her come up with the right content.

#FanMade is the official hashtag bestowed upon the pop star’s new music video movement, one geared towards getting all her fans to twerk for the camera.

“Send me your best twerk videos to my new song and I will put a video together of all my favorites,” she wrote on her Facebook page. Below the messaging lies all the necessary ingredients (webcam, video upload link, submit link) to submit your video to Miley.

That’s sort of the full extent of the campaign’s messaging. Make a twerk video; send it to Miley. If she likes it, your ass might get a spot in a music video.

This plan is all but a sure thing to backfire. Twerking, for those still delightfully unaware, is a name bestowed upon a rather promiscuous dance move, one that challenges individuals—mostly women—to stand with their backs to the camera (or stand on their hands with their feet against a wall) and shake their butts back and forth in a repetitive manner.

The move has gotten students suspended and one teacher fired, infuriating a whole slew of overprotective fathers in the process. Considering that Miley Cyrus maintains a young fan base, chances are that we’ll see a few more kids getting in trouble real soon.

None of the videos submitted for #FanMade have made their way into the world of public consumption quite yet. They’re all being stored for vetting on Miley’s behalf. While we wait, let’s take a look at the most popular twerk video on YouTube, a music video for Lady’s “Twerk” that’s been seen more than 5 million times. Objects in the mirror may be closer than they appear.