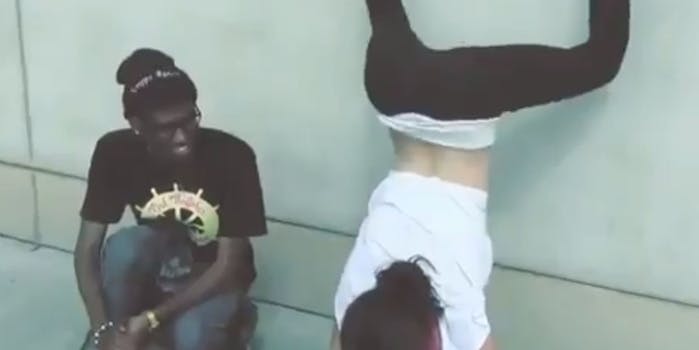 It's a sad day in America when you can't videotape yourself twerking on school grounds without getting suspended.

It’s a sad day in America when you can’t videotape yourself twerking on school grounds without getting unceremoniously suspended from school and barred from your own prom.

San Diego’s Scripps Ranch High School is the locale for the latest YouTube-orchestrated student scandal, where, according to the Southern California city’s NBC affiliate, 33 students were, as one student tweeted, “suspended, banned from prom, and prevented from walking at graduation” because of their participation in a minute-long twerk video.

Twerk videos, if you didn’t watch the video above, are sort of like Harlem Shake videos in terms of audience participation—and sanctions levied against those who perform them in the wrong places—and generally involve women arranging themselves into a handstand position and shaking their butt to-and-fro.

The move arrived on the Internet last July under the consultation of world-famous DJ Diplo, whose #ExpressYourself campaign called for pictures of the posture to be posted to Twitter before making their way onto the video-sharing site.

The video’s subject matter was likely enough to get the kids suspended—Scripps Ranch’s student handbook prohibits “dance moves that may be considered sexually provocative”—but it didn’t help that the student who made it, supposedly the YouTube user Nunya Bee, used school equipment to film, soundtrack, and edit the clip.

The suspension has been a controversial talking point in San Diego circles, where parents believe school officials overreacted and kids believe they should be able to twerk all they want.

In fact, those students have come out so supportive of their suspended brethren that  they recently unearthed the #freethetwerkteam Twitter hashtag, which has been posted nearly 500 times in the past 24 hours, with some mentions coming from as far away as Texas and Baltimore, Md.

Seniors suspended for the video will have the opportunity to appeal their dismissal from both prom and graduation. Should they win, we hope they’ll twerk their way across the stage when pick up their diplomas.