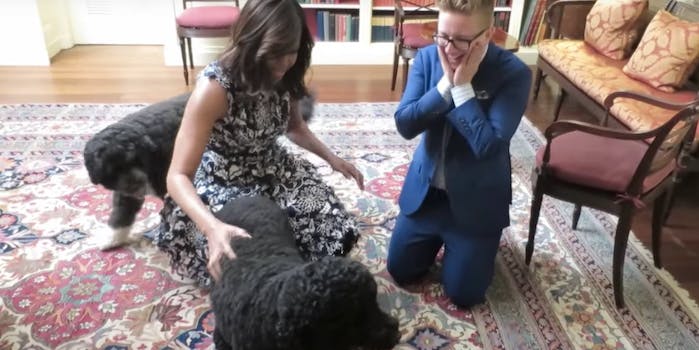 It's a puppy party!

Michelle Obama and Tyler Oakley reunited for a video on his channel, but this time she brought some very special guests: dogs.

Oakley was at the White House hosting a panel for the Beating The Odds summit, an event for college-bound students who’ve passed insurmountable challenges. After, Oakley shot vlog-style, arm outstretched, with the First Lady, but only got flustered when the White House dogs, Bo and Sunny, were about to show up.

“Tyler’s not flustered about me or the president,” joked Obama, even saying that the dogs got all brushed up just for Oakley.

After seeing if the dogs can do tricks (they can at least roll over), the duo got back to business talking about higher education.

“It gives you the confidence and skills you need to go on and do whatever you want in life,” said Obama of a college education. “To be able to compete for those jobs of the future in an increasingly globalizing economy, you’ve got to have a college education.”

It was a little more serious that her recent Carpool Karaoke appearance, but James Corden didn’t have any puppies.