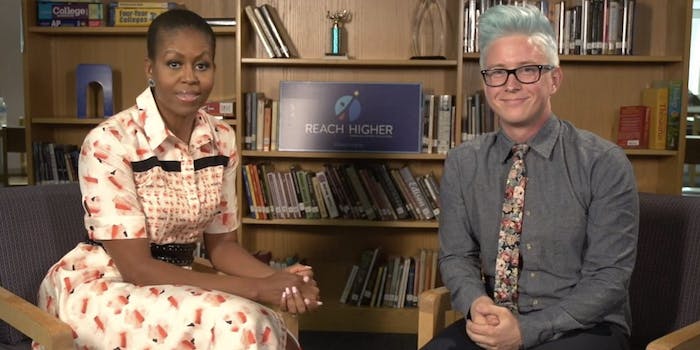 Now that he’s had sit-down time with the President and First Lady, is it safe to say Tyler Oakley is a politico?

At the very least, he’s lent his Internet fame to some presidential causes. While his Streamy Award-winning meeting with President Obama about healthcare had a decidedly more formal tone, Oakley went the relaxed route with MIchelle Obama, sitting down for a laid-back Q&A on his channel to discuss her Reach Higher campaign, aimed at encouraging post-secondary education in the United States.

Oakley joked that he was at her house recently, with Obama sparring back, “I was jealous. I feel like I needed my time with Tyler, so, you know, here we are.” The pair discussed their own college experiences, with Obama revealing she never failed a class but did get a C or two on a test.

Overall, the video enforces the idea that post-secondary education is crucial, and that there’s a version of college suited for students’ needs and situation. It’s interesting for Obama to take to YouTube to get her message out. Yes, the young eyeballs are there, but many of the platform’s biggest teen stars are either on hiatus from college or have no plans to attend, instead focusing on their YouTube careers. Oakley, however, is a model student. He started his channel while in college and, post-graduation, has gone on to massive fame with the platform.