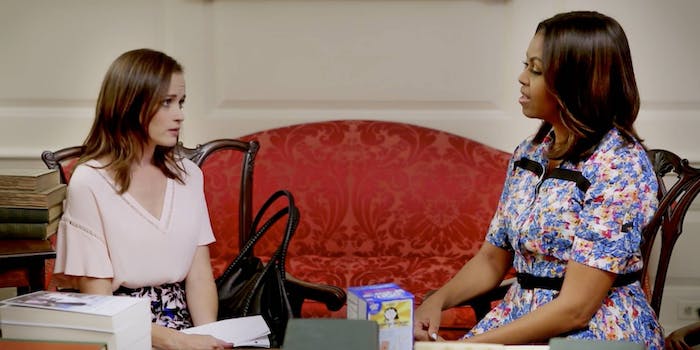 If only they'd sniffed books together.

Gilmore Girls is back! Well, almost.

Just a couple of girls talking about books… (👻: michelleobama)https://t.co/CS48LB9fk7

Playing the role of Rory, Alexis Bledel never breaks character when rattling off book recommendations, from Austen to Shakespeare. She even hands Obama some pop-tarts, and talks about trying to join her on her “Let Girls Learn” trip only to have the Secret Service shut her down.

Rumors have been swirling about Obama’s guest appearance, among many other plot points to be featured in Gilmore Girls: A Year in the Life. Netflix is playing fast and loose with the show, giving it four 90 minute episodes that have yet to find a release date. This footage only stokes the curiosity of fans.

You can still queue up the episodes so they’ll appear once they’re available, though it’s unclear as to when that will be. For now, fans will just have to settle for two minutes of Rory and Michelle’s book chat.

For those interested in following along on Obama’s “Let Girls Learn” trip to addressing education hurdles girls face in lesser developed countries, she’s launched a Snapchat for that exact purpose.