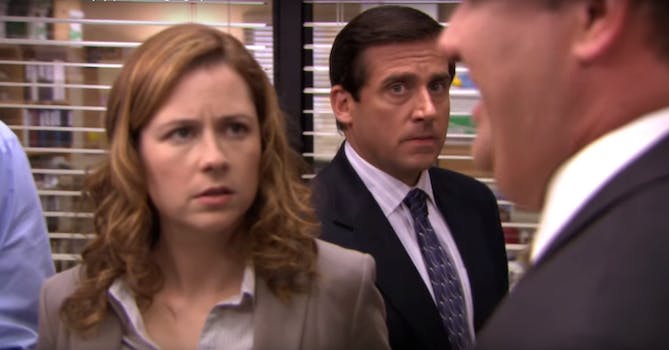 Michael's lies created and exploited fissures within Dunder Mifflin way before Russia did it.

Michael Scott, that bumbling, lovable office manager, demonstrated the effectiveness of informational warfare way before Vladamir Putin made it cool.

It was Michael, after all, who deployed salacious rumors and fake news in season 5 of The Office, flooding the proverbial zone—the office—with so many untrue statements that no one could tell what, if anything, was true. Michael (Steve Carell) in this 2009 episode didn’t have vast Russian troll farms at his disposal, but he did have word of mouth, and the effects of his well-meaning disinformation campaign show us a lot about the power of lies.

It all started when Michael, ruled by a pathological insecurity, learns that he’s out of the gossip loop: Two interns in the Dunder Mifflin office had sparked up a relationship, and Michael was the last to know. Furious, Michael grills one of the interns about the alleged group date discussed by the gaggle of office workers. This intern says he saw longtime Dunder Mifflin salesman Stanley Hudson (Leslie David Baker) at the club where the interns went on their group date. Stanley, the intern says, was with a woman. When Michael learns that Stanley’s wife was out of town, he gets down to the business of spreading the rumor that Stanley is in the throes of an extramarital affair.

Confronted by Michael about the rumor, Stanley begrudgingly admits to cheating on his wife. Michael, ever the idiot, is stunned. He’s determined to dispatch so many untruths that anyone who heard about Stanley’s affair would question the veracity of the single salacious claim among many.

“You can’t put words back in your mouth, but you can spread false gossip so that people think that everything that’s been said is untrue,” Michael says, hatching his office disinformation plot. 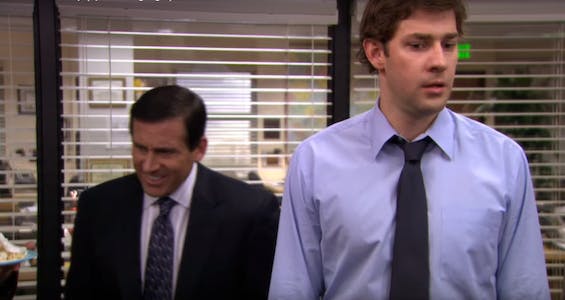 Suddenly, rumors proliferate throughout the Dunder Mifflin Scranton branch: Michael tells Kelly (Mindy Kaling) that Erin (Ellie Kemper) could soon be fired, he tells Erin that Kelley has an eating disorder, he tells Kevin (Brian Baumgartner) that Angela (Angela Martin) is dating an 81-year-old billionaire who owns a local Quiznos franchise. Other rumors take hold: Creed (Creed Bratton) has asthma, Jim (John Krasinski) is a J-Crew model, Toby (Paul Lieberstein) is a virgin, there’s a person who lives inside Kevin and controls him (like that Krang character from Teenage Mutant Ninja Turtles), Oscar (Oscar Martinez) is the voice of the Taco Bell dog, Andy (Ed Helms) is gay, and Pam (Jenna Fischer) is pregnant.

Michael’s mission is accomplished: Flummoxed, the officemates ask where each had heard the rumors, leaving everyone believing nothing about the unverified gossip zipping through the condensed office world. The Dunder Mifflin workers confront their boss, Michael, who admits his role in triggering the shameless fake news campaign designed to cover up the one true rumor: Stanley’s cheating on his wife.

Dismiss Michael’s mockumentary hi-jinx at your own peril. Taking in the underlying and explicit messages in The Office‘s “Gossip” episode could provide a helpful lens through which we can understand the raw power of destroying truth with lies, whether it’s in our own media, coming from across the world in a building full of trained Russian internet trolls, or pundits and bloggers smearing Parkland shooting survivors as “crisis actors” and paid political pawns for the mega-rich with a gun control agenda. Are the students speaking out against the NRA on cable news and Twitter the real thing, or are they actors deployed by some insidious organization? Are the authorities in on this anti-gun conspiracy? Was this another false flag operation, like Sandy Hook? If you spend enough time on YouTube, you might not know.

If nothing can be verified—if people are forced to juggle hundreds of tidbits that may or may not be true—then nothing is true. Truth is annihilated, and that’s the point. As someone in the George W. Bush White House once said, those who “believe that solutions emerge from your judicious study of discernible reality” stand no chance against those determined to “create our own reality,” by creating truth where there is none, and shaping history. Lies are weapons. Mass confusion can be power. The powerful know that when the truth is decimated, there stands a void waiting to be filled with invented truth. You might call these “alternative facts.”

A former Russian troll farm worker spoke to the Washington Post this month about the Orwellian existence of regular folks trained to spread lies and ruin political discourse through the world’s most popular websites. The professional troller described groups numbering in the hundreds paid to write “absolute untruths” during 12-hour shifts, sometimes playacting with fellow troll farm propagandists in the comment section of news articles and YouTube videos. These online posters would act out an argument that ended with one of the trolls changing their minds on a political subject. An entire reality was created for unsuspecting Americans from nothing by people sitting in a warehouse half a world away.

The assault on truth isn’t limited to forces outside our borders, of course. The Republican Governors Association recently launched a propaganda news site posing as a traditional news outlet. The site converts opposition research into news articles while trumpeting the nation’s 34 GOP governors. This shapes a new reality for the millions vacuuming up information online. Sure, traditional media is reporting the opposite of this RGA-written news article, so what are you to believe? Confusion ensues and the truth vacuum is created.

The most startlingly funny part of The Office “Gossip” episode is Andy Bernard’s reaction to the rumor that he’s gay. It triggers an existential crisis for the preppy paper salesman, prompting him to ask the openly gay Oscar whether he believes Andy is in fact gay. 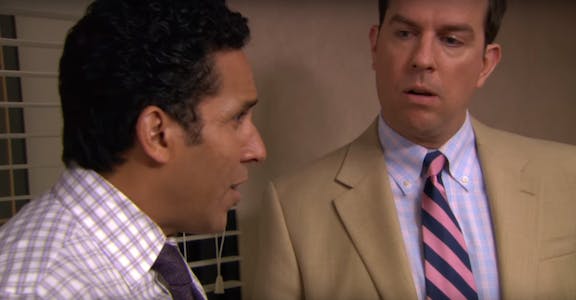 A mere suggestion circulated through the Dunder Mifflin office made Andy question who he is. The lie made him doubt what he has presumably known for his entire adulthood: that he’s heterosexual. This is roughly analogous to people who reacted to Russian Facebook propaganda during the 2016 election cycle by attending pro-Trump rallies after the candidate had clinched the GOP nomination. Behavior was altered by propagandists with a mission, just as Andy’s behavior was temporarily changed during Michael’s rumor bonanza. We see Andy asking Jim if Pam would set him up with a friend, maybe a guy friend. He wasn’t sure. Surely the Facebook propagandists didn’t convert Americans into hardline conservatives, but they were compelled to gather. They were manipulated on every level—psychologically, emotionally, and physically—by an online posting with that express purpose. It’s not farfetched to wonder if someone out there, like Andy, questioned who they were.

Michael’s lies created and exploited fissures within the Dunder Mifflin office. Web-based propaganda videos and articles do the same thing on much larger scales, manipulating entire electorates and influencing a nation’s political reality.

Michael used his laboratory to show exactly how much lies can fuck things up. Thankfully, the Scranton office didn’t devolve into a dystopian fascist state in the following episodes. The lies were sussed out. The vacuum of lies was eviscerated. The business of selling paper resumed.

“It was a weird day for false facts,” Michael says with a shrug. “Who knows what to believe.”