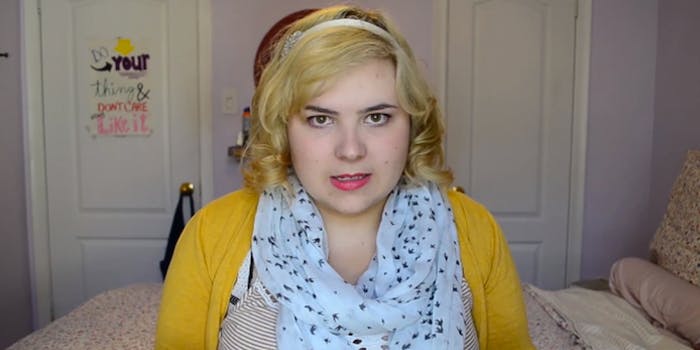 Last month, Megan MacKay posted a video to her YouTube page in which she offered a “Ray Rice-inspired makeup tutorial.” Yes, the title might make you hesitant to click, but in the span of just three minutes, MacKay breaks down the NFL’s domestic violence problem and the culture of victim-blaming while applying foundation. The video now has more than 2 million views.

The 22-year-old Toronto writer and comedian has developed a very specific approach to her YouTube videos. They often present themselves as makeup, beauty, or food tutorials, then dive deeper into a topic in the news that week, pairing satire with a feminist or political take on the issue. MacKay has taken on Hobby Lobby, Nine West’s “husband hunting” shoes campaign, and Urban Outfitter’s tasteless Kent State sweatshirt. She applied to be Cambridge University’s Doctor of Chocolate. Most recently, she addressed Celebgate under the guise of a Thanksgiving recipe tutorial.

We asked MacKay a bit more about walking the line between satire and sincerity in her videos.

I’m wondering how you decided to use makeup tutorials to talk about more important issues. How did that become your way into the discussions?

I’m an SNL junkie, so the idea of creating a “parody of the medium”-style channel was really appealing to me. SNL’s a TV show that makes fun of the stuff you see on TV, including commercials, game shows, soap operas, and the 6 o’clock news. If you watch makeup tutorials on YouTube, it logically follows that you would watch parodies of makeup tutorials on YouTube. The medium is the message, and all that jazz. Long story short: Marshall McLuhan’s ghost came to me in a dream and told me to do this. Spoooooooky. (Totally kidding.)

That makeup tutorial subculture is so popular on YouTube, especially with young women. Why do you think that is? Do you have some favorites?

I personally love makeup because it’s a fun, creative way to express yourself. My best friend of 15 years is a professional makeup artist, and her favorite part of the job is watching clients look in the mirror and light up because they just straight-up feel awesome about themselves. Nobody “needs” to wear makeup, obviously, but makeup is fun and it’s about self-expression, and self-expressed people tend to feel more confident and all-around badass. If a vampy red lip makes you feel like you could slay a dragon, I don’t see anything wrong with wearing it as much as you want. If you’d rather conquer the kraken barefaced, do that instead. Makeup’s not obligatory. It’s about making people feel good.

Michelle Phan taught me how to apply foundation correctly, and Lauren Luke introduced me to the novel concept of not applying matte black eyeshadow all the way up to my eyebrows. Thanks, ladies.

Can you tell me how you approached the Ray Rice video? How do you find the right balance of comedy and seriousness?

All of the victim-blaming and indifference surrounding the Ray Rice incident made me nauseous, but I wasn’t sure how to tackle those feelings and make them into something productive. I knew I wanted to make something really structured and carefully worded, and I remembered that I had released my Hobby Lobby makeup tutorial about a month prior. I had really enjoyed playing with that format and I thought it fit the story really well, so I went to script with it.

Balancing comedy with seriousness is a finicky thing. Laughter is a visceral, involuntary response, so if you’re going to take your audience through different emotional stages, you have to be prepared to lay some significant groundwork. In the grand scheme of things, I’m a comedy greenhorn, so I’m still trying to figure this stuff out, but I’ve seen some incredible comedians at the Second City in [Toronto] and in Chicago take audiences of 300, 400 people from laughter to tears to laughter again in under 60 seconds. I think the common thread that they all share is that they’re honest, open, and vulnerable with their audience and with their scene partners.

What makes for good satire?

I think good satire deconstructs and subverts oppression and the oppressors. It holds people in power accountable and points out the flaws in systems that serve the people in power. Satire never goes after the little guy.

Is the topic of your video usually something in the news that week? Do you see your videos as sort of like an Internet version of Weekend Update?

I do tend to favor topical stuff nowadays. I think everybody likes to read and talk about what’s going on in the world around us, myself included. It’s very human, and it brings us together. Generally I start my writing process by reading the news and picking a handful of stories that make me feel something visceral. Then I try to zero in on the core idea behind that visceral feeling. From that core idea, I’ll build out and start structuring my script for the week.

As for being the Internet Weekend Update, that’s really high praise and I have no idea how to process that without being weird about it. Thank you. Growing up, I loved comedy, but I didn’t know I wanted to do it professionally until the first time I saw Tina [Fey] and Amy [Poehler] on the Update desk. Literally 30 seconds into the segment, I decided that comedy was gonna be it for me. So really, that comparison means a lot.

What were some of your earlier videos like? What did you discuss?

My early videos were definitely more random and surreal, and I posted more sporadically because I was still in school. I shot and edited whenever the mood struck me, and the sketches were less topical. “How to Drink a Pumpkin Spice Latte” and “How to Build a Gingerbread House” are both completely bizarro gross-out food videos with seasonal tie-ins but no real connection to any news story at the time. I also talked less, though I’m not sure what’s left to say when you’re running a beer-soaked cookie house over with your car.

In light of the recent Sam Pepper allegations, do you think there’s been a signal boost for women creators on YouTube to speak out against abuse and sexism? Do you think YouTube has a creep problem?

I think the ladies on YouTube are doing an awesome job at demilitarizing the F-word. So many people are terrified of feminism because of the completely unwarranted negative stigma attached to the word. I think we’re more receptive to reprogramming our definition of feminism when we see a badass, 100 percent real lady break it down for us in an open, friendly way, and YouTube is the perfect space for that. I’m totally into seeing more of that.

I think the world in general has a creep problem in that we let creepy people get away with doing deplorable stuff because we busy ourselves with victim-blaming behavior. It becomes more visible on YouTube because the medium is so much more personal than any other form of entertainment. Many successful YouTubers connect with their audience on a very intimate level, and they’re writing, directing, editing, and uploading their videos as a one-man wonder. With this direct-to-fanbase distribution model and complete creative control over their content, a creepy, terrible sociopath could manufacture a personality and manipulate their way into gathering a following.

That being said, there are so many awesome channels and creators on YouTube who have immense respect for their audience and for the process. If we have a creep problem, we also have an abundance of strong, capable people to drown out the creeps and blow the whistle when appropriate.

And, on that topic, do you read the comments?

I read most of the comments. I definitely have to gird my loins before checking out the comments on my more political videos. I’d say like 98 percent of the comments I read are from awesome people who are into what I’m doing and/or they have valid constructive criticism regarding the content of my videos. The remaining 2 percent consists of comments about irrelevant stuff, like my appearance. That stuff doesn’t really bother me. I’m finally at a point in my life where I’m very comfortable with who I am, how I look, and what I have to say. It took me so long to get here that I’m unwilling to let someone on the Internet take that away from me.

What are some of the videos you’re most proud of?

It feels kinda cheesy to say, but I’m really proud of the Ray Rice video. The script, production, editing—everything just came together for me on that one. I admire comedians who have this ability to walk the razor’s edge when it comes to satire, so I’m always attempting to emulate that spirit and that attitude.