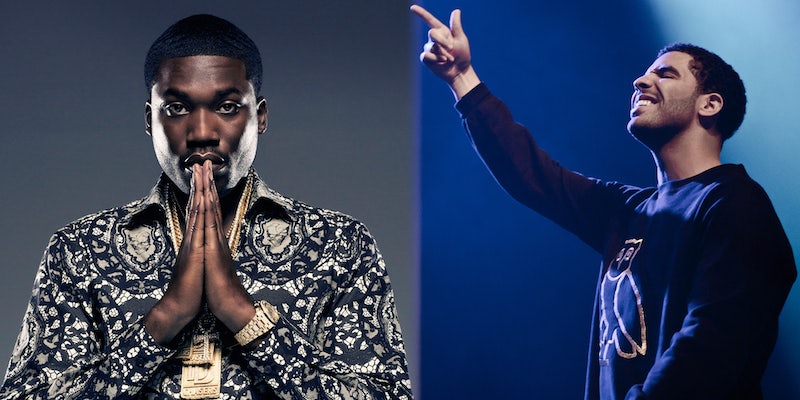 A dedicated timeline to the most viral beef in recent memory.

Late Thursday, Philadelphia rapper Meek Mill retaliated to consecutive diss songs from superstar Drake. A feud that began with a tweet, then some Instagram posts, then a Tumblr post, came full circle with three songs that didn’t pull punches.

It’s been a strong career move for both rappers, as the beef has sparked authenticity thinkpieces and generally stirred the pot of most hip-hop blogs’ fan forums. The only thing left to do? Declare a winner. Let’s get there together.

Rope-a-dope: Drake responds to Meek in the form of a yawning diss track “Charged Up,” in which the lightweight ethers himself with the laughable line, “No woman ever had me star struck or was able to tell me to get my bars up.” Drake has made an entire career of being star struck by women: Nicki Minaj, Rihanna, Courtney from Hooters on Peach Street, etc.

However, he was still able to put it on wax (proverbially, natch) while altogether seeming completely unbothered. Drake premiered the song on his Apple Music radio show and played the track four times in a row, plus a final fifth to end the program.

Duck and weave: Rumors swirled two days after Drake’s diss track that New York City DJ Funkmaster Flex would be premiering Meek’s response on Hot97. Tri-State area residents tuned in, suckers everywhere downloaded the Funk Flex app, and the rap Internet collectively tuned in to hear what ended up only being a basic Top 40 set. Funk Flex didn’t ever get Meek’s mp3 in the email, but instead went in on Drake himself and premiered a reference track by Quentin Miller for Drake’s “10 Bands.”

But lo and behold, Flex dropped a bomb. And according to popular opinion, so did Meek.

The end result, “Wanna Know,” is a mean record, but it also appears to be as rushed as Meek has appeared since Drake came right at him with SoundCloud uploads. Meek did not expect so many people to brush off the original ghostwriting claims, nor was he ready for his music to be judged by a wider public that is mostly OK with Aubrey Graham as a rapper who will occasionally use the phrase “catch a body.”

That said, Meek landed jabs to Drake’s jaw with “Wanna Know.” It begins with the Undertaker’s theme song and includes an interpretation of a reference track by Drake’s ghostwriter. Along with Meek rapping like this whole exchange could be classified as “battle rap” and Puff Daddy dancing across the outro, the song is easily the hardest if not the most cutting of this beef. Meek may have also left a permanent scar by revealing that Drake was peed on at a movie premiere years ago. That was somehow completely unknown until now.

Weigh-in pose: Drake, always feeling like he won even in the jaws of defeat, posted this on Instagram.

Drake has the advantage of a wide fanbase that is widely apathetic toward authenticity and a dated concept of a rapper drawing from nothing but his pen. At the same time, if any more of these reference tracks come to surface, it’s going to be awfully hard for Drake to continue dodging the basis for this whole beef.

Four Drake reference tracks have now come out, including “R.I.C.O.,” the collaboration with Meek that seemed to set off the rift between the two rappers. That song in particular featured almost the entire finished Drake verse, save a couple lines, performed poorly by the co-writer Quentin Miller. Bouncing ideas off people in the studio is one thing, but rap is not a genre of cover bands. Drake is safe for now, but he has more to lose than Meek does (save for Ms. Minaj).

However, sometimes the social media coordinator running a brand’s account finds a way into the conversation beautifully. For that, we have to toast beloved, Texas-based fast food chain, Whataburger.

Update 11:05am CT: Another fast-food chain is getting in on the action now, with White Castle suggesting Meek Mill has other options besides beef.