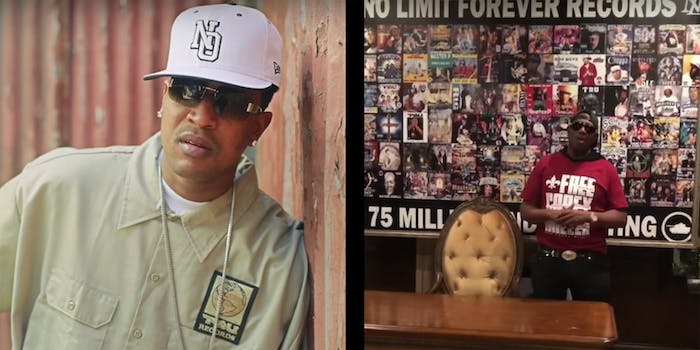 'I’m not going to let my brother rot in a cell and be treated with injustice.'

Rapper Master P is using social media to spread awareness that his brother, rapper Corey “C-Murder” Miller, has been on hunger strike for over a week to protest being “locked up for a crime he didn’t commit” at the Louisiana State Penitentiary.

“I’m not going to let my brother rot in a cell and be treated with injustice,” Master P wrote in an Instagram post on Wednesday.

Also called Angola, the maximum-security prison where Miller is being held has a history riddled with corruption, poor conditions, and allegations of sexual assault.

Free Corey Miller! Thanks to all the fans that’s been praying for my brother. He’s on a hunger strike in Angola. He’s been locked up for a crime he didn’t commit. Somebody has confessed and they even have footage,that they don’t want to put in the case. My brother is no angel and has done a lot of dumb stuff like most. But I love him and i will fight for him to bring awareness to this injustice. You can’t choose your family but you can choose your friends. When it get real we all we got. #freecoreymiller #FreeAllTheInnocent

Miller has been serving time at the prison since 2009 when he was sentenced to life for the killing of a 16-year-old during a nightclub gunfight in 2002. Master P, born Percy Miller, also said that although the two have been out of touch, he believes his brother is innocent.

Corey Miller’s attorney provided two witnesses in 2015 who say they saw Miller at the nightclub and that he was not involved in the shooting, according to the Times-Picayune.

Miller’s publicist, Tammy “Ty” Page, told AllHipHop that someone else has confessed to the killing.

“The actual person that fired the gun that night sits in a prison in Georgia and has signed an affidavit with an audio confessing to a separate attorney whom knew nothing of Miller’s case, stating that he, not Miller, is the one that is responsible for the killing and is not associated with Miller,” Page said.

Page also expressed concerns about the open pending charges against guards at the prison for sexual misconduct. Miller accused prison guards of placing inmates on suicide watch in cells with other suicide watch inmates and neglecting them, poisoning inmate food with shards of glass, and manipulating documents to cover-up foul play.

“I am constantly in danger for standing up and speaking against such a large and powerful enemy,” Miller told AllHipHop.

In a SoundCloud statement posted by AllHipHop on Jan. 31, Miller said he went on a hunger strike with fellow inmates to fight conditions at the prison, which sparked varying reactions on Twitter.

Some tweeted they no idea Miller had been serving time there or that Angola prison—which is nicknamed for the African origin country of the slaves who once lived on the land—existed in the first place.

the 'Angola' isn't in Africa?

Accusations of foul play at the prison are abundant. The former warden, Burl Cain, resigned after he was accused of using prison resources and public money to renovate his home, the Associated Press reported last year. The Louisiana legislative auditor’s office also reported more sketchy dealings involving the prison, including “more than $100,000 in personal purchases and undocumented cash withdrawals made by a former prison employee.”

Miller’s hunger strike, however, is mainly in protest of the conditions for inmates and the continued employment of Assistant Warden Barrett Boeker, who has been accused of rape.

Miller has expressed concerns over retaliation but said he has asked civil rights attorneys for help.

“Only in Angola can a warden be arrested for rape and continue to serve as an officer in this Louisiana penal system,” Miller said. “This warden has an abundant amount of racism and physical harm complaints against him from other inmates. We need an internal affairs investigation now. We cannot survive or live in such deplorable and inhumane conditions.”

Have you been to Angola Prison? It's like going back to the 18th Century. One of the most shocking, jaw-dropping experiences of my life.

The Daily Dot has reached out to Master P and the Louisiana State Penitentiary for comment.