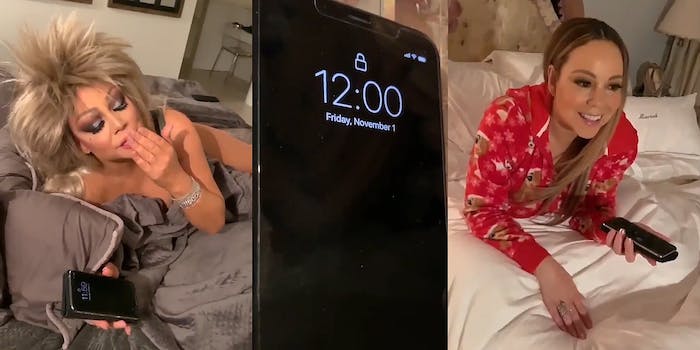 'All I Want For Christmas Is You' Eve comes earlier every year.

Did you know Halloween is also “All I Want For Christmas Is You” Eve?

If you haven’t already heard Mariah Carey’s unavoidable holiday song somewhere in the world, as the gap between Halloween and Christmas gets smaller and smaller every year, she’s here to remind us that her royalties are about to start flowing in again.

In a video posted at 2am, Carey, who apparently went as the hair-metal version of Mimi for Halloween, showed what happens at midnight on Nov. 1.

According to the Twitter account Chart Data, the song broke a Spotify record in 2018 for single-day streams, seeing more than 10 million streams on Dec. 24 and beating XXXTentacion’s previous record in June 2018. The Economist reported in 2017 that the song, which is 25 years old this year, has netted Carey more than $60 million in royalties, with a majority coming from streams.

While the song typically hits the Billboard charts in early December (at least since 2012, when older songs were allowed on), last year “All I Want For Christmas Is You” made its earliest appearance yet, charting in mid-November. If that trend is any indication, 2019 will see the highest “AIWFCIY” concentration yet. The memes are already here.

Me on Oct 31 Me on Nov 1 pic.twitter.com/saXjIgjN8n

Asked about the 25th anniversary of the song, Carey told USA Today that she doesn’t really “acknowledge time,” something she reinforced a few months ago when she refused to acknowledge FaceApp. Mariah Carey has always been here.