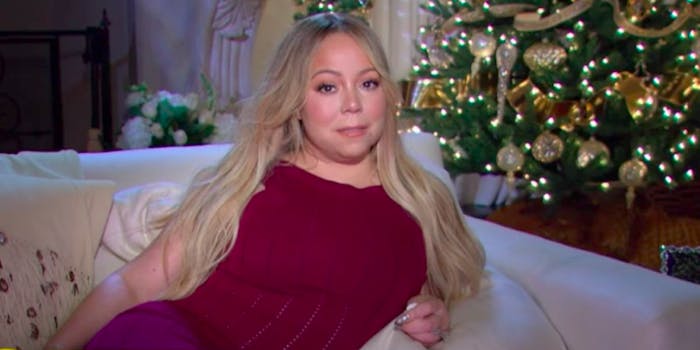 Piers Morgan asked her about the Las Vegas shooting.

Mariah Carey is making headlines for her performance—this time, however, it’s unrelated to her music.

On Monday, the “All I Want For Christmas Is You” singer appeared for a scheduled interview on Great Morning Britain to promote an upcoming Christmas U.K. tour. However, the air time coincided with initial breaking news about the Las Vegas shooting. Host Piers Morgan, knowing Carey has held residency performances in Las Vegas, decided to ask the singer questions about the recent attack.

In a now viral response, Carey is shown sprawled across a sofa with a bright Christmas tree behind her; voice monotone, face almost emotionless.

“I pray for the victims and hope all these can stop as soon as possible,” Carey said. “You know, I have spent a lot of time in Vegas and this type of thing anywhere happening anywhere is a huge tragedy.”

The interview was cut short soon after to report the news.

Many feel the question surrounding the recent attack at the Route 91 Harvest Festival was unfair to push on the singer, who was on the show for a scheduled interview to promote her tour. They have since voiced their opinions across social media, specifically Twitter.

Give Mariah Carey a break. She was on GMB to discuss a Christmas tour not the Las Vegas shooting. It's not her fault she was blind-sided.

people are DYING and some people are using this as a time to bash mariah carey for going through with a pre planned interview? fuck off

Morgan took to Twitter to explain his side of the story. Morgan said that asking Carey about Las Vegas was newsworthy, and that he ran the move by her team.

Mariah was booked to do an interview about her UK Christmas tour. Obviously news events in Vegas have now taken precedence. https://t.co/3SxHKPXYen

We told Mariah's people before the interview.
Her reaction seemed very relevant given she's a performer who often has residence in Vegas. https://t.co/6sVMSUMvHK

But even though fans showed their support, Carey still can’t seem to catch an internet break.

Mariah Carey was interviewed about the Vegas shooting while simultaneously shooting her Christmas special "The Grinch That Stole Taste." pic.twitter.com/Xkzv9FaWVl

The singer posted to Twitter after the interview as well, praying for the safety of everyone involved in the attack.