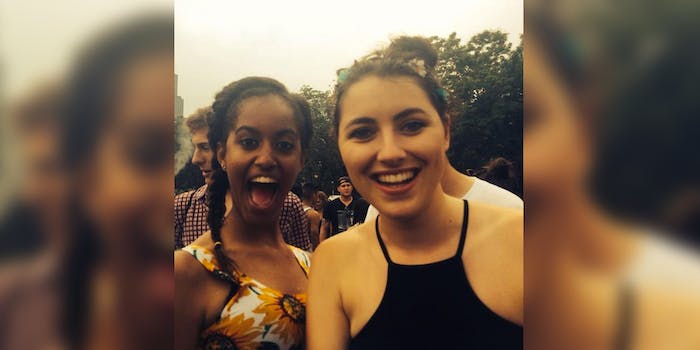 Malia Obama spent much of the past few days at Lollapalooza and probably had a better weekend than the rest of us.

With a few Secret Service agents in tow, Obama—who previously went to Lollapalooza in 2014—attended the four-day music festival in Chicago. Like when she toured Brown University last year, fellow attendees were beside themselves after spotting Obama enjoying the festival like any other 18-year-old who came out to see their favorite artists, posting photos and video online.

Was going hard to @CASHMERECAT and then Secret Service and Malia Obama just pull up pic.twitter.com/lfNRxWzwRu

when the girl jumping is malia Obama https://t.co/BxpKGOljLC

Because the first day of Lollapalooza fell during the last night of the Democratic National Convention, some people complained that Obama skipped the DNC to attend Lollapalooza. Twitter users had her back though, pointing out that she wasn’t obligated to go to the DNC and drawing comparisons to how much Obama is scrutinized compared to other First Children, even some who had missteps in the public eye.

For now Obama is being a regular teenager—and she has some pretty decent taste in music.