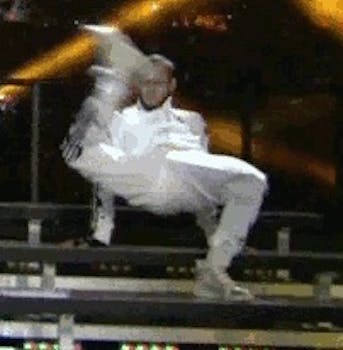 Don't try this move at home—unless you have excellent health insurance.

Have you heard about the windmill foot?

During Madonna’s Super Bowl half-time show, one of her dancers startled the viewing masses with a scene-stealing move.

The background dancer twirls the front half of his leg around in such a way that it appears dislocated. Internet commenters have called it “painful,” and “unnatural.” Hence, the “windmill foot,” the name given to the dance move by Buzzfeed and the Huffington Post.

(Watch the dancer on the right side of the screen)

After a slew of animated GIFs and videos of the dance move, the big question of the day remains.

So who is the man, and how did he do it?

The dancer appears to be Lilou, an award-winning French hip hop dancer who has toured with Madonna for at least seven years. That “windmill foot” move, is a staple of Lilou’s routine, and he’s spent a decade perfecting it, as evident by fan videos of him on YouTube.

Lilou, nor any of his dance crew, was available for comment at press time, so the “how” remains a mystery, for now.