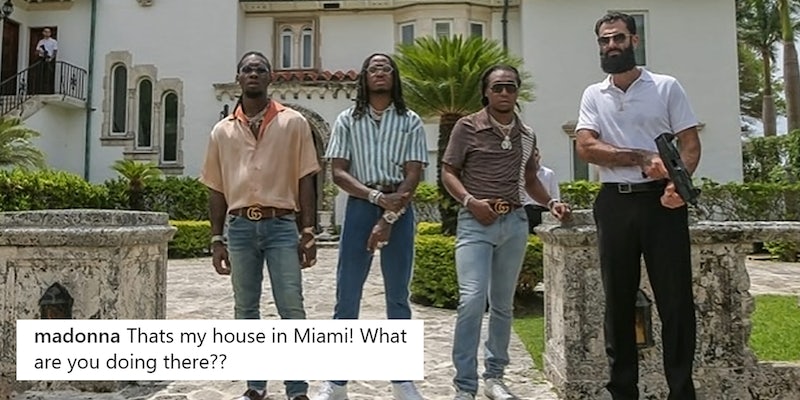 Madonna wants to know why Migos is at her house

Quavo had a very on-brand response.

Life is a mystery, but Madonna apparently solved one on Instagram.

Migos just put out a new video for the track “Narcos,” which references Pablo Escobar and celebrates the trap life. The backdrop is a gorgeous vine-draped mansion along what appears to be Florida’s Intracoastal Waterway, and it looked familiar to Madonna.

“Thats my house in Miami! What are you doing there??” Madonna wrote in the comments.

Migos’ Quavo posted the photo on Wednesday to promo “Narcos,” but the two question marks after Madonna’s comment were a bit concerning. Did she really not know that Migos was filming a video at her home? It could also signal an in-joke, as Madonna took a photo with two-thirds of Migos (and Cardi B) in March and they’re probably all friends now and maybe if you zoom in on one of the windows you can see her.

It could also be Madonna’s former house, though Google Image Search shows a few former homes in Miami.

All the same, Quavo had a fantastic response: “Trappin.”

Still, more people don’t seem to be addressing the bigger mystery: those sandals.