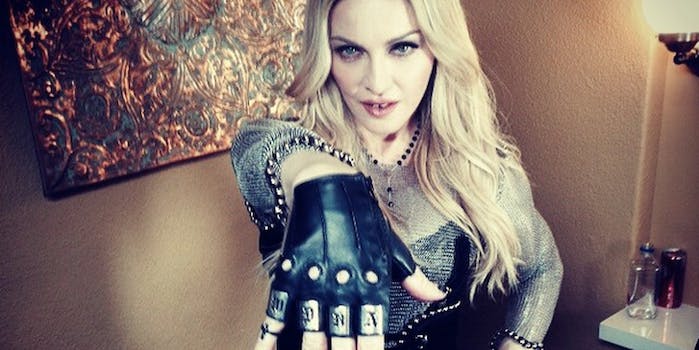 'Why is it ok to show ass but not breasts?'

To say that Madonna’s had a tumultuous relationship with Instagram would be an understatement. First, it was the use of a racial slur in one of her captions that drew ire. Then, it was the singer’s fuzzy underarm that ruffled feathers. Now, the pop icon is at it again, this time using her naked body to take a stand.

Late Thursday, Madge took to her account to post a snap of herself in the buff with only a black bar covering her naked breasts. “Why is it ok to show ass but not breasts?” the singer captioned the image. “Drowning in the hypocrisy of social media.”

It appears that the Rebel Heart singer’s black bar was enough to appease Instagram’s community guidelines, as the post has yet to be removed. So does this mean that the queen of pop is the latest lady to join the crusade to #freethenipple?

Unsurprisingly, this isn’t the first time the bold 56-year-old has taken a stand for nudity on Instagram. In November the singer posted a photo of herself from the ’90s with a black bar over her breasts. “Its confusing. Nipples are considered forbidden and provocative but exposing your ass is not,” she captioned the image.

One thing is for certain, nothing will stop Madonna from being an “#unapologeticbitch.”