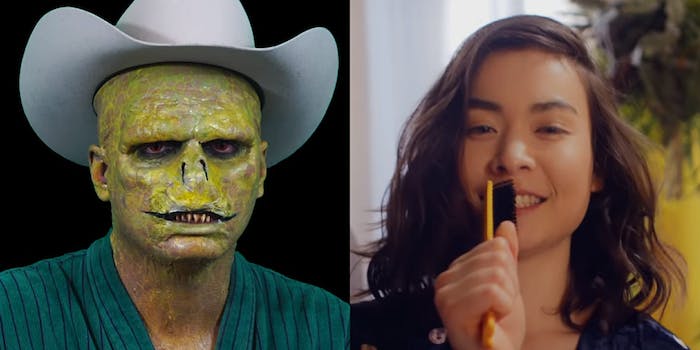 Mitski laughs off similarities between her and Mac DeMarco’s album

Mitski downplayed any beef with DeMarco, who claimed he'd never listened to her album.

Mac DeMarco just released a video for new single “Nobody,” in which he sports a cowboy hat, robe, and mottled green lizard face, and sings an underwhelming song about, um, television?

It was released in advance of his new album Here Comes the Cowboy, out in May. In a statement about the album release, DeMarco, who’s become a meme for his wholly unoriginal love of smoking, says it’s his “cowboy record. Cowboy is a term of endearment to me, I use it often when referring to people in my life. Where I grew up, there are many people that sincerely wear cowboy hats and do cowboy activities. These aren’t the people I’m referring to.”

It was quickly pointed out that singer Mitski also has a song called “Nobody,” off 2018’s Grammy-nominated album Be the Cowboy. Had DeMarco heard her album? According to his rep, no. Addressing the similarities, Mitski tweeted that she’s “100% sure mac & I just went fishing in the same part of the collective unconscious!” She added that her “personal conspiracy theory” is their mutual PR rep “heard the album+track titles but kept quiet thinking maybe some Mac fans will mistakenly find me loll.”

when a man says your point, louder, in a meeting two minutes later https://t.co/AcbDa09XiM

mitski: this is a concept unreachable to me in the sense that i’m an asian woman and it symbolises what american society views as being admirable, primarily using white men in classic westerns as a metaphor to something i cannot be seen as

While fans rallied around and defended Mitski, she tweeted that she wasn’t sure why everyone was getting upset, stating: “i’m laughing!”