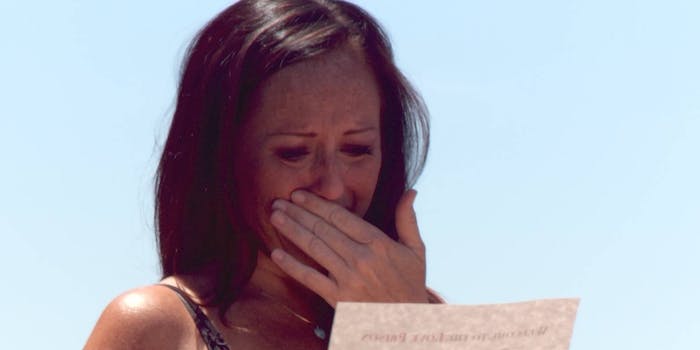 It might have been wiser for A&E to stick to reality shows that bear some semblance of reality.

It’s refreshing to know that the programmers at A&E can greenlight ideas that have nothing to do with pawn shops, storage lockers, and duck decoy barons.

But as we’re about to find out with the Sept. 8 debut of Love Prison, it might have been wiser for A&E, along with production partner Leftfield Productions, to stick to reality shows that bear some semblance of reality. Love Prison is a sad mashup of numerous cinematic predecessors built on the premise that opposites attract, absence makes the heart grow fonder, or objects on the screen appear far more wonderful than they do in real life.

The concept is rather shaky: A couple who has been dating online for months is put on an island for a week to get to know each other while we, the viewing audience, play voyeur, hoping for titillation, verbal skirmishes, or any sort of conflict that will lead to a large audience and social media buzz. Episode one features a middle-aged slacker from Long Island and a hopeless romantic from California in search of heart-stopping love. The duo have to spend 23 hours a day indoors (for maximum audience torture) which allows the producers to pull off such dumb human tricks as remotely turning on a TV that reveals somewhat juicy details about the love prisoners’ past. (On second thought, even “somewhat juicy” is a bit of an overstatement.)

On top of the tired premise and boring subjects, Love Prison is a rather cheesy production. While most reality shows (now affectionately called “unscripted”) take place on exotic islands off the coast of Madagascar or in the South Seas, this program is shot on picturesque Belden Island, a long swim off the coast of Branford, Conn. One wonders if the dude from Long Island took the bus or train to this deserted isle.

While it isn’t much of a spoiler, the show’s cliffhanger comes when, after their week together, the female of the pair has to decide whether she will go ashore in a boat with her online guy or return to land solo. Beyond that, I’d hate to ruin a rather predictable ending for the pilot episode.

Love Prison could benefit from following one of A&E’s popular new shows, Brandi and Jarrod: Married to the Job, a spinoff of the network’s iconic Storage Wars series. But truth be told, not even the best lead-in can salvage this sad piece of reality fluff.