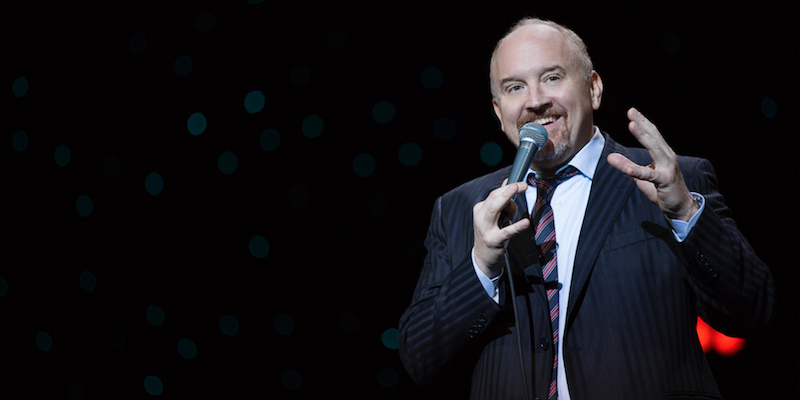 The acclaimed comic skips politics. But he jokes about almost everything else.

Louis C.K. dispenses with lead-ups in his new Netflix special, 2017. He dives right in: “Not getting an abortion that you need is like not taking a shit,” he sums up.

Filmed in D.C. in January, the special—the first of two for Netflix—marks C.K.’s first since 2015’s Live at Madison Square Garden. Since then C.K. produced the webseries Horace and Pete and FX series Baskets, and took out his Trump rage in email form. While there’s no direct mention of Trump in 2017, C.K.’s well-worn pessimism still tints the lens. He offers up his opinions on abortion (“I think that women should be allowed to kill babies”) in the steep opening, though he does hear both sides. He irons out his practiced delivery once he starts talking about Christianity and the dubious accounting of history.

C.K. returns to political material toward the end. He pivots a joke about finding out a middle school classmate is now a woman into a segment about transgender people and how they’re smarter (“They figured out what’s going on with them, and they fixed it”). It’s delivered differently than Dave Chappelle’s jokes about gay and transgender people in his recent L.A. Netflix special. That special was filmed in 2016, but it still felt outdated. C.K.’s special feels a bit more timely, something Netflix has to take into account if fans are going to be compelled to watch multiple specials from big comedians.

But C.K. mostly sticks to enduring material: getting his daughters a rescue dog, the plight of public school teachers, death, the futility of love, and the “disgusting modern human behavior” known as re-reading an angry email you just sent. A joke about watching Magic Mike a little too obsessively segues into a rumination about wanting a boyfriend, but C.K. prefaces the joke with a warning to the future: That movie came out in a very different time.

In all these bits, C.K. engages the conversational gymnastics that inform his sets. It’s as if he’s having a debate with himself and we’re watching. In the abortion joke, he switches sides abruptly, not so much stating his stance as illustrating how muddled and ridiculous the debate has gotten. (Abortion should be legal because people are way too excited about life.) In his closing bit about Magic Mike, he sets us up with a winding elucidation of the male anatomy and attraction, only to cut down the towering expectation of the punchline. And then the special ends as abruptly as it began.