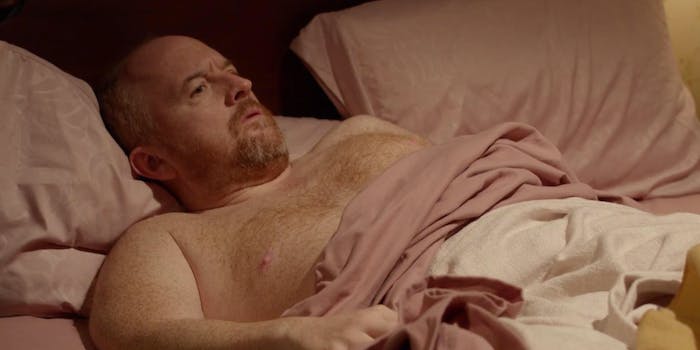 'He is playing you.'

Louis C.K. fans who are subscribed to his email list have become accustomed to getting Saturday missives about his new webseries, Horace and Pete. Today, the tone was a little different.

In a strongly worded email, the comedian directed his ire at “insane bigot” Donald Trump, and immediately compared him to Hitler, though he’s not the first to do so.

He also cautions fans that he’s “not advocating for Hillary or Bernie. I like them both but frankly I wish the next president was a conservative only because we had Obama for eight years and we need balance. And not because I particularly enjoy the conservative agenda. I just think the government should reflect the people.”

Naturally, his feelings divided the Internet.

Louis CK slammed Trump, but still wants a conservative. So he's not the Voice of Reason: He's Mitt Romney with jokes https://t.co/Pm48zDtmhi

He does admit that this kind of missive might come off as a celebrity just complaining, but claims “That’s just my view. At least right now. I know I’m not qualified or particularly educated and I’m not right instead of you. I’m an idiot and I’m sure a bunch of you are very annoyed by this. Fucking celebrity with an opinion. I swear this isn’t really a political opinion.”

We’re guessing there won’t be a Trump cameo on Horace and Pete. Here’s the Trump-centric portion of the email:

Please stop it with voting for Trump. It was funny for a little while. But the guy is Hitler. And by that I mean that we are being Germany in the 30s. Do you think they saw the shit coming? Hitler was just some hilarious and refreshing dude with a weird comb over who would say anything at all.

And I’m not advocating for Hillary or Bernie. I like them both but frankly I wish the next president was a conservative only because we had Obama for eight years and we need balance. And not because I particularly enjoy the conservative agenda. I just think the government should reflect the people. And we are about 40 percent conservative and 40 percent liberal. When I was growing up and when I was a younger man, liberals and conservatives were friends with differences. They weren’t enemies. And it always made sense that everyone gets a president they like for a while and then hates the president for a while. But it only works if the conservatives put up a good candidate. A good smart conservative to face the liberal candidate so they can have a good argument and the country can decide which way to go this time.

Trump is not that. He’s an insane bigot. He is dangerous.

He already said he would expand libel laws to sue anyone who “writes a negative hit piece” about him. He says “I would open up the libel laws so we can sue them and win lots of money. Not like now. These guys are totally protected.” He said that. He has promised to decimate the first amendment. (If you think he’s going to keep the second amendment intact you’re delusional.) And he said that Paul Ryan, speaker of the house will “pay” for criticizing him. So I’m saying this now because if he gets in there we won’t be able to criticize him anymore.

Please pick someone else. Like John Kasich. I mean that guy seems okay. I don’t like any of them myself but if you’re that kind of voter please go for a guy like that. It feels like between him and either democrat we’d have a decent choice. It feels like a healthier choice. We shouldn’t have to vote for someone because they’re not a shocking cunt billionaire liar.

We should choose based on what direction the country should go.

I get that all these people sound like bullshit soft criminal opportunists. The whole game feels rigged and it’s not going anywhere but down anymore. I feel that way sometimes.

And that voting for Trump is a way of saying “fuck it. Fuck them all”. I really get it. It’s a version of national Suicide. Or it’s like a big hit off of a crack pipe. Somehow we can’t help it. Or we know that if we vote for Trump our phones will be a reliable source of dopamine for the next four years. I mean I can’t wait to read about Trump every day. It’s a rush. But you have to know this is not healthy.

If you are a true conservative. Don’t vote for Trump. He is not one of you. He is one of him. Everything you have heard him say that you liked, if you look hard enough you will see that he one day said the exact opposite. He is playing you.

In fact, if you do vote for Trump, at least look at him very carefully first. You owe that to the rest of us. Know and understand who he is. Spend one hour on google and just read it all. I don’t mean listen to me or listen to liberals who put him down. Listen to your own people. Listen to John McCain. Go look at what he just said about Trump. “At a time when our world has never been more complex or more in danger… I want Republican voters to pay close attention to what our party’s most respected and knowledgeable leaders and national security experts are saying about Mr. Trump, and to think long and hard about who they want to be our next Commander-in-Chief and leader of the free world.”

When Trump was told what he said, Trump said “Oh, he did? Well, that’s not nice,” he told CBS News’ chief White House correspondent Major Garrett. “He has to be very careful.”

When pressed on why, Trump tacked on: “He’ll find out.”

(I cut and pasted that from CBS news)

Do you really want a guy to be president who threatens John McCain? Because John McCain cautiously and intelligently asked for people to be thoughtful before voting for him? He didn’t even insult Trump. He just asked you to take a good look. And Trump told him to look out.

Remember that Trump entered this race by saying that McCain is not a war hero. A guy who was shot down, body broken and kept in a POW camp for years. Trump said “I prefer the guys who don’t get caught.” Why did he say that? Not because he meant it or because it was important to say. He said it because he’s a bully and every bully knows that when you enter a new school yard, you go to the toughest most respected guy on the yard and you punch him in the nose. If you are still standing after, you’re the new boss. If Trump is president, he’s not going to change. He’s not going to do anything for you. He’s going to do everything for himself and leave you in the dust.

So please listen to fellow conservatives. But more importantly, listen to Trump. Listen to all of it. Everything he says. If you liked when he said that “torture works” then go look at where he took it back the next day. He’s a fucking liar.

A vote for Trump is so clearly a gut-vote, and again I get it. But add a little brain to it and look the guy up. Because if you vote for him because of how you feel right now, the minute he’s president, you’re going to regret it. You’re going to regret it even more when he gives the job to his son. Because American democracy is broken enough that a guy like that could really fuck things up. That’s how Hitler got there. He was voted into power by a fatigued nation and when he got inside, he did all his Hitler things and no one could stop him.

Again, I’m not saying vote democrat or vote for anyone else. If Hillary ends up president it should be because she faced the best person you have and you and I both chose her or him or whoever. Trump is not your best. He’s the worst of all of us. He’s a symptom to a problem that is very real. But don’t vote for your own cancer. You’re better than that.

That’s just my view. At least right now. I know I’m not qualified or particularly educated and I’m not right instead of you. I’m an idiot and I’m sure a bunch of you are very annoyed by this. Fucking celebrity with an opinion. I swear this isn’t really a political opinion. You don’t want to know my political opinions. (And I know that I’m only bringing myself trouble with this shit.) Trump has nothing to do with politics or ideology. He has to do with himself. And really I don’t mean to insult anyone. Except Trump. I mean to insult him very much. And really I’m not saying he’s evil or a monster. In fact I don’t think Hitler was. The problem with saying that guys like that are monsters is that we don’t see them coming when they turn out to be human, which they all are. Everyone is. Trump is a messed up guy with a hole in his heart that he tries to fill with money and attention. He can never ever have enough of either and he’ll never stop trying. He’s sick. Which makes him really really interesting. And he pulls you towards him which somehow feels good or fascinatingly bad. He’s not a monster. He’s a sad man. But all this makes him horribly dangerous if he becomes president. Give him another TV show. Let him pay to put his name on buildings. But please stop voting for him. And please watch Horace and Pete.

Screengrab via Horace and Pete