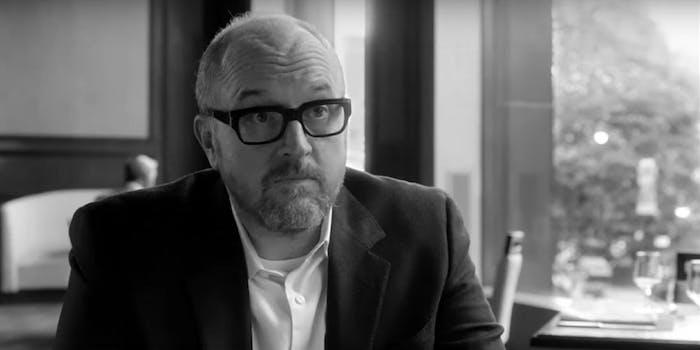 The premiere of Louis C.K.’s controversial film I Love You, Daddy has been canceled.

The movie was scheduled to screen Thursday night at New York City’s Paris Theatre, but “unexpected circumstances” caused the screening to be canceled, according to the film’s distribution company.

According to the Hollywood Reporter, a source claims a New York Times story on the comedian is looming. Other sources have confirmed a story is on its way.

For weeks the NYT has been prepping a story about Louis CK and calling everyone in the comedy world and Hollywood, my sources have received calls…it appears that story will be published soon. Per @THR the premiere for his movie has been cancelled.

Rumors about Louis C.K. have been circulating for years, but the comedian has never directly addressed them. I Love You, Daddy caused some head-scratching after its September TIFF premiere. The film depicts a relationship between a 17-year-old (Chloe Grace Moretz, who plays C.K.’s daughter) and an older filmmaker (John Malkovich), which of course brought out the Woody Allen parallels. C.K. also apparently uses the N-word.

His appearance on tonight’s The Late Show With Stephen Colbert has also been canceled.