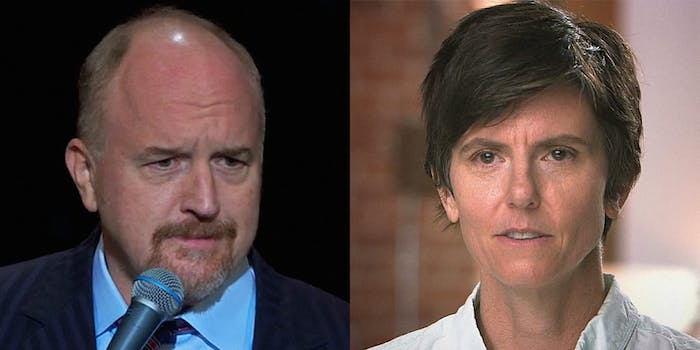 Rumors of misconduct have followed C.K. for years.

Comedian Louis C.K. has an executive producer credit on Tig Notaro‘s Amazon series One Mississippi, but in a new interview with the Daily Beast, she says he has “never been involved” with the show.

The second season of One Mississippi, which is based loosely on Notaro’s life, is set to debut next month, and the Daily Beast article notes that one of the storylines involves an incident of sexual misconduct in the workplace. In her interview, Notaro said C.K. should “handle” rumors of his own misconduct, which have followed him for years.

In 2012, Gawker ran a blind item asking, “Which Beloved Comedian Likes to Force Female Comics to Watch Him Jerk Off?” and in 2015, it followed it up with a piece in which a tipster named C.K. in an alleged incident. Last year, comedian Roseanne Barr told the Daily Beast: “It’s Louis C.K., locking the door and masturbating in front of women comics and writers. I can’t tell you—I’ve heard so many stories. Not just him, but a lot of them. And it’s just par for the course. It’s just shit women have to put up with.” Comedian Jen Kirkman also alluded to being harassed by a male comedian, with many drawing lines to C.K.

Furthering this divide, it was pointed out in April that an SNL skit about a clown service, featuring host C.K., was very similar to a Notaro short from 2015. In a statement about the sketch, Notaro said she was “extremely” disappointed but that she and C.K. had not spoken in a year and a half. C.K. helped raise Notaro’s profile after he put her revelatory 2012 Largo set on his website.

The Daily Dot has reached out to Amazon for comment.