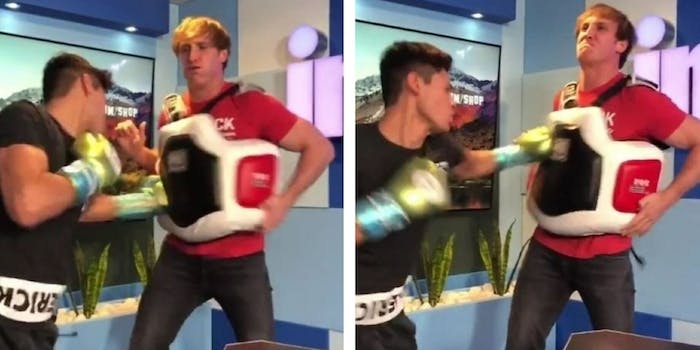 While recording a podcast late last week, professional boxer Ryan Garcia got to participate in an activity that surely will make many YouTube users jealous: He got to hit Logan Paul in the stomach over and over again.

Garcia, a rising prospect with a 17-0 record and a huge social media following (1.7 million Instagram followers), will be featured this week on Paul’s podcast, Impaulsive. While recording the interview late last week, Paul strapped on a body protector and let Garcia show his power by repeatedly blasting him with body blows.

I was just tired of this dude had to whoop @loganpaul check out me out monday on the podcast @impaulsiveshow who’s next to take on the challenge? #ryangarcia #boxing #boxeo #loganpaul #bodyshotchallenge

As Garcia jokingly wrote on Instagram, “I was just tired of this dude had to whoop @loganpaul check out me out monday on the podcast @impaulsiveshow who’s next to take on the challenge?”

While it looked like Paul took the fall at the end of the punching barrage simply to avoid more pain, Garcia’s power is no joke. He’s one of the better-known prospects in boxing, and he’s recorded 14 knockouts in his 17 victories. Including this vs. Braulio Rodriguez in his latest fight.

Although Paul earned the Daily Dot’s worst YouTuber of the year title, he turned his career around in 2017, thanks largely to his long-running feud with KSI and their successful amateur pay-per-view YouTube boxing match in August that ended in a draw. He’s scheduled for a rematch with KSI that won’t happen until at least November.

Still, Paul made $14.5 million for the year according to Forbes, and he’s tried to keep himself in the mainstream by challenging Michael B. Jordan to a boxing match and calling out other combat sports stars to compete against him in an MMA match.

But as Garcia showed, Paul should probably stick to competing against amateurs. As Paul exclaimed when he stood up after he was knocked off his feet by the 18-punch combination, “Wow. Holy shit.”