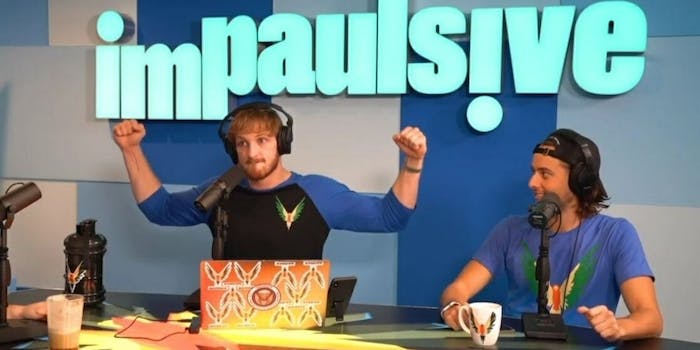 Logan Paul challenges Michael B. Jordan to a boxing match

Logan Paul is going after one of the most impressive fictional boxers in recent movie history.

The YouTube star is apparently looking for a potential combat sports opponent, and after former professional wrestling star and occasional MMA fighter CM Punk turned him down, Paul went after Michael B. Jordan in his newest podcast. Jordan stars in Creed 2 as the jacked-up son of Rocky Balboa’s biggest rival and friend. Although Jordan looks mighty convincing as somebody who would tear an amateur fighter to shreds, that didn’t stop Paul from analyzing how their fight would proceed.

On his new podcast, Impaulsive, Paul earlier this week challenged Jordan—who, come to think of it, was also a physical specimen as Erik Killmonger in Black Panther.

“I’ve spent the whole first half of this year learning how to box,” Paul said. “I was watching this movie, and I’m like, ‘Yo, Michael B. Jordan, big fan. [I] could probably beat your ass in the ring.”

Paul’s buddy, Mike Majlik, commented on how “jacked” Jordan is in the movie, but Paul correctly pointed out that a muscular body doesn’t always lead to winning results in boxing.

Paul spent much of the past year hyping an amateur boxing match against fellow YouTube star KSI. That fight ended in a draw, and the two are supposed to fight a rematch next year in Los Angeles (though that apparently hasn’t been made official yet—Paul, on his podcast, also said KSI might “bitch” out of that rematch, anyway).

Earlier this week, Punk, when asked about the possibility of facing Paul in an MMA match, told TMZ, “I think this is one of the avenues where people will be like, ‘I don’t even know who Logan Paul is.’ Logan Paul is apparently a popular guy, but it’s not in any kind of avenue that I drive my car on. The only thing I know about him is he’s the guy who filmed the dead body in the Japanese suicide forest, which is don’t get me started on that, because I’ll say a bunch of stuff and then I’m sure somebody will make a YouTube video about it.

“When you fight somebody, when you enter into a fight camp, you have to spend a lot of time thinking about that person … And, I’m not into sharing that much of my time and my headspace and my life with somebody that did something that I feel is so reprehensibly disrespectful to the people of Japan, who I love.”

Now, Paul has turned his sights on a movie star, saying, “I want to make it happen.” Here’s the clip of Paul challenging Jordan, who hasn’t responded to the offer on social media.