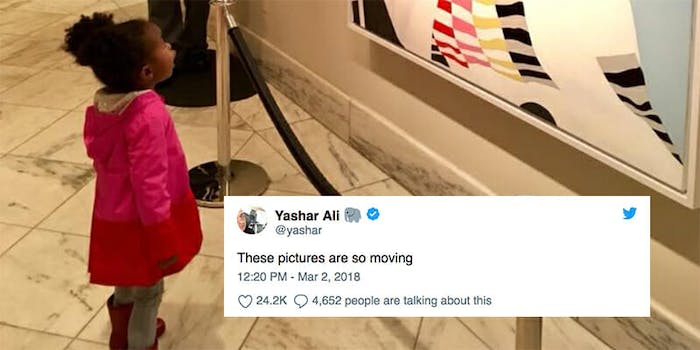 When Michelle Obama’s official portrait was revealed, the former first lady talked about the young girls of color who would see someone who looks like themselves in the painting. A photo that went viral this week shows that happening in real time.

On Thursday, Facebook user Ben Hines shared a photograph he took of a little Black girl staring mouth-agape at Obama’s portrait, which hangs in the Smithsonian in Washington, D.C.

In the caption, Hines said him and his mom “were delighted to wait in line behind this fellow art lover and hopeful patriot.”

Donna Hines & I made a pilgrimage today and we were delighted to wait in line behind this fellow art lover & hopeful patriot.

The photograph captured a priceless moment, going viral with more than 11,000 likes on Facebook and countless reposts on other social media platforms.

"I'm also thinking of all the young people…who will see an image of someone who looks like them hanging on the wall in this great American institution. I know the impact that will have on their lives, b/c I was one of those girl." – Michelle Obama, 2/12/18

The portrait artist herself, Amy Sherald, shared a photo of the girl staring at her work.

“Feeling all the feels,” she wrote, going on to explain how a painting of a black man helped her realize she could accomplish her dreams of being an artist.

People on Twitter were stunned by the power of the photographs of the little girl, who BuzzFeed News reported is 2-year-old Parker Curry.

These pictures are so moving pic.twitter.com/AGBniGNQ1K

This is for all those who tell me I'm too negative, and never post anything positive. Feast your eyes on this gorgeousness… pic.twitter.com/REKjjVUIRu

As soon as the Obamas’ portraits were revealed, much of the internet fell in love with the pieces of art and everything they represent about the former president and first lady.

For many, the photograph of Curry is a symbol of why representations of people of color in powerful positions are so important, a main point of the speech Michelle Obama made when her portrait was first unveiled at the Smithsonian in February.

“I’m thinking about all the young people, particularly girls and girls of color who in years ahead will come to this place,” Obama said at the time, “and they will look up and they will see an image of someone who looks like them hanging on the wall of this great American institute.”

This picture is so important. It's one thing to be told you're capable of great things. It's another to view evidence that you are.

Update 10:58amCT, March 7: Curry on Tuesday met the former FLOTUS herself, and the two of them danced to Taylor Swift’s “Shake It Off.” Watch the adorable meet-cute below:

Parker, I'm so glad I had the chance to meet you today (and for the dance party)! Keep on dreaming big for yourself…and maybe one day I'll proudly look up at a portrait of you! pic.twitter.com/faUVTsYWun