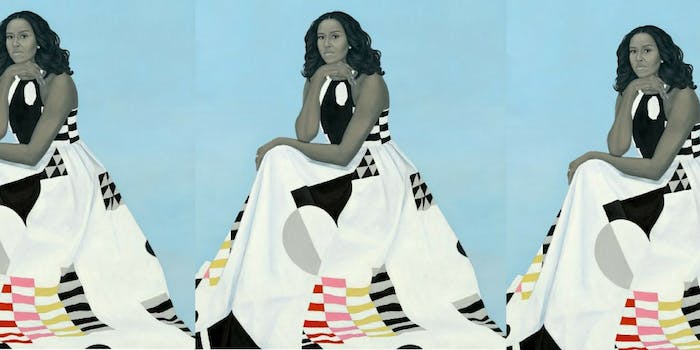 What’s the secret political meaning behind the dress in Michelle Obama’s portrait?

This dress is certified iconic.

Why is former First Lady Michelle Obama‘s dress in her official Smithsonian portrait so monumental? Well, it’s full of secrets.

On Monday, the Smithsonian National Portrait Gallery unveiled the official portraits of former President Barack Obama and the first lady, created by artist Amy Sherald, signaling an onslaught of praise (and memes) from Obama fans.

However, beyond the appreciative tweets and crude critiques, it would appear that Mrs. Obama’s portrait isn’t just a work of art, but a political message reflecting where the U.S. currently stands, one year after the former president’s departure and the beginning of President Donald Trump‘s brazen reign.

.@MichelleObama wore a @MillybyMichelle Spring 2017 dress for her portrait by Amy Sherald. More later on our site. @NPG pic.twitter.com/uHfFj6MwhT

The floor-length gown Obama wears in the portrait was inspired by a cotton poplin dress designed by Michelle Smith for her spring 2017 Milly collection. Smith told the Washington Post the line itself was inspired by a political message, encompassing the “desire for equality, equality in human rights, racial equality, LGBTQ equality.”

However, using lacing and ties, as well as disconnected blocks of color and shades of grey, Smith sought to create a “feeling of being held back… that we’re not quite there yet.”

Smith said Obama doesn’t have the exact iteration of the dress worn on the runway, but a “more discreet” version with the same corset-style lacing.

Oh, and pockets. Yes, even a year after her departure, the former first lady is still an inspiration.