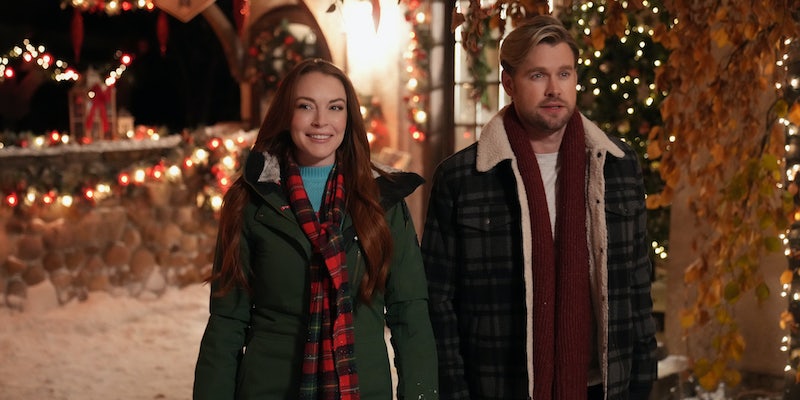 Even if 'Falling For Christmas' is only a so-so movie, it’s exciting to see Lohan take command of a movie again.

The holidays will soon be upon us, and with that comes perhaps one of the biggest staples as of late in the cheesy Christmas rom-com. Operating in mostly tame executions of well-worn romantic tropes doused with a heavy serving of Christmas Magic (that’s probably peppermint-flavored), you won’t find anything more saccharine on TV.

For the most part, Falling For Christmas would fit that descriptor to a T. Sierra Belmont (Lindsay Lohan) is a privileged hotel heiress who gets amnesia after an accident and forgets everything about herself, including her name and that she has a harmlessly dim influencer boyfriend who recently proposed to her. As she recovers, she stays with Jake Russell (Glee’s Chord Overstreet), a widower and single father who owns a nearby bed and breakfast. Jake lives in the nearby town—nondescript with a Main Street and plenty of Christmas activity—and he has both an overly precocious daughter and a failing business that keeps losing bookings to fancy ski resorts like the one Sierra’s father owns and Airbnb listings.

Falling For Christmas is quite silly and tame, and while I don’t think it’s particularly good, it’s a pretty solid Christmas movie with all the comforting trimmings that come along with it. It features a pretty blatant nod to Mean Girls within the first 15 minutes, ending with one character describing Sierra’s voice as “pitchy.” And for those keeping track, it’s yet another entry into Netflix’s Holiday Cinematic Universe: A Castle For Christmas starts playing when Sierra accidentally opens up Netflix on a TV. But it’s a really fun showcase for Lohan, who hasn’t headed a movie in a while and a solid reminder of what we’ve been missing.

But as much as we love those comforting tropes, it’s also fun to pick them apart. As I watched Falling For Christmas and the sad mom backstories were revealed I was reminded of a recent viral tweet from someone who said, “thinking of all the wives that had to die for all the widowed hunks in christmas romcoms”; Falling For Christmas has not one but two dead moms! And while the shape of the holiday movie might change as they become more inclusive, you can always count on hunks show up in every movie with men being part of the romantic pairing.

For people of a certain age (myself included), Lindsay Lohan was a prominent presence in many of the films that defined their childhoods. So even if Falling For Christmas is only a so-so movie, it’s exciting to see Lohan take command of a movie again, and we hope that there’s far more to come.