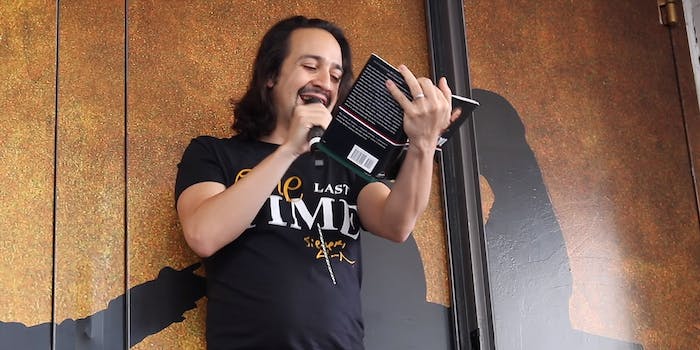 Screengrab via Hamilton: An American Musical/YouTube

But the show will go on without him.

Lin-Manuel Miranda’s final performance in Hamilton is later this week, so he turned toward none other than the man he played on Broadway every week for his final Ham4Ham show.

Ham4Ham, the weekly shows Miranda would put on with members of the cast and special guests for those who didn’t win the lottery (as well as thousands watching online), have taken over the internet since he first introduced them last year.

“You know, this whole thing was an accident. This Ham4Ham,” Miranda told the crowd. “When we had our first lottery, 700 people showed up and we didn’t know what to do with all of that so I just got up and said a few words and said ‘Thank you for coming to the lotto, we love you very much, goodbye.’ And it’s turned into this.”

Instead of a musical performance, Miranda read the crowd a letter Hamilton wrote to his wife Eliza before they married, which at times sounds more like Fifty Shades of Grey and has a quote or two that ended up in Hamilton.

He’s later joined by Leslie Odom, Jr., and Phillipa Soo, who are both leaving Hamilton at the end of the week, as they come together for a rendition of “Happy Trails.”

What will become of Ham4Ham? Fear not—Rory O’Malley, Hamilton’s current King George III, will be taking over emcee duties.