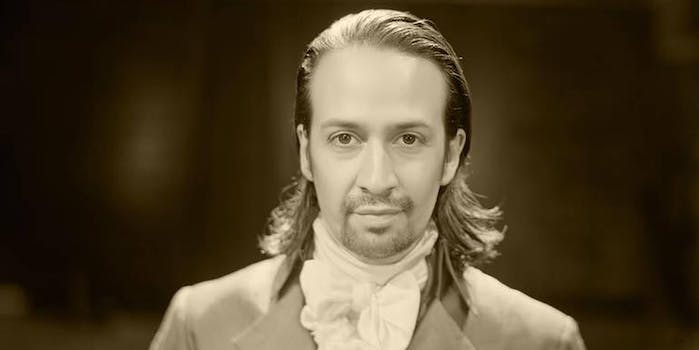 Miranda is said to be leaving to 'work on other projects.'

All good things must come to an end. According to The Hollywood Reporter, Hamilton creator and star Lin-Manuel Miranda has told “confidants” that he will be leaving the production to pursue other projects.

According to “sources close to the production,” Miranda’s contract and the contracts of many other cast members will expire on July 9, and he will be leaving on that day. Vulture reports that other actors are supposedly in the process of renegotiating their contracts for higher salaries and may leave if the negotiations fall through.

Fans of the Tony-nominated hip-hop musical were distraught at the possibility of the play losing its Pulitzer Prize-winning muse.

When @RonaldoCrespo texts you that Lin-Manuel Miranda is leaving @HamiltonMusical a week before you have tickets https://t.co/qgvnltg3yv

i just cried bc I saw articles about Lin Manuel Miranda leaving Hamilton, i am not stable !!!

Me: *hears @Lin_Manuel is leaving Hamilton*
Me: *cries, prays it isn't true, cries even more, enters every ticket lottery I can* #Hamilton

Fans of Miranda can eventually catch him in Mary Poppins Returns with Emily Blunt. Don’t hold your breath, though, Hamiltonians—the movie won’t be out until Christmas Day 2018.