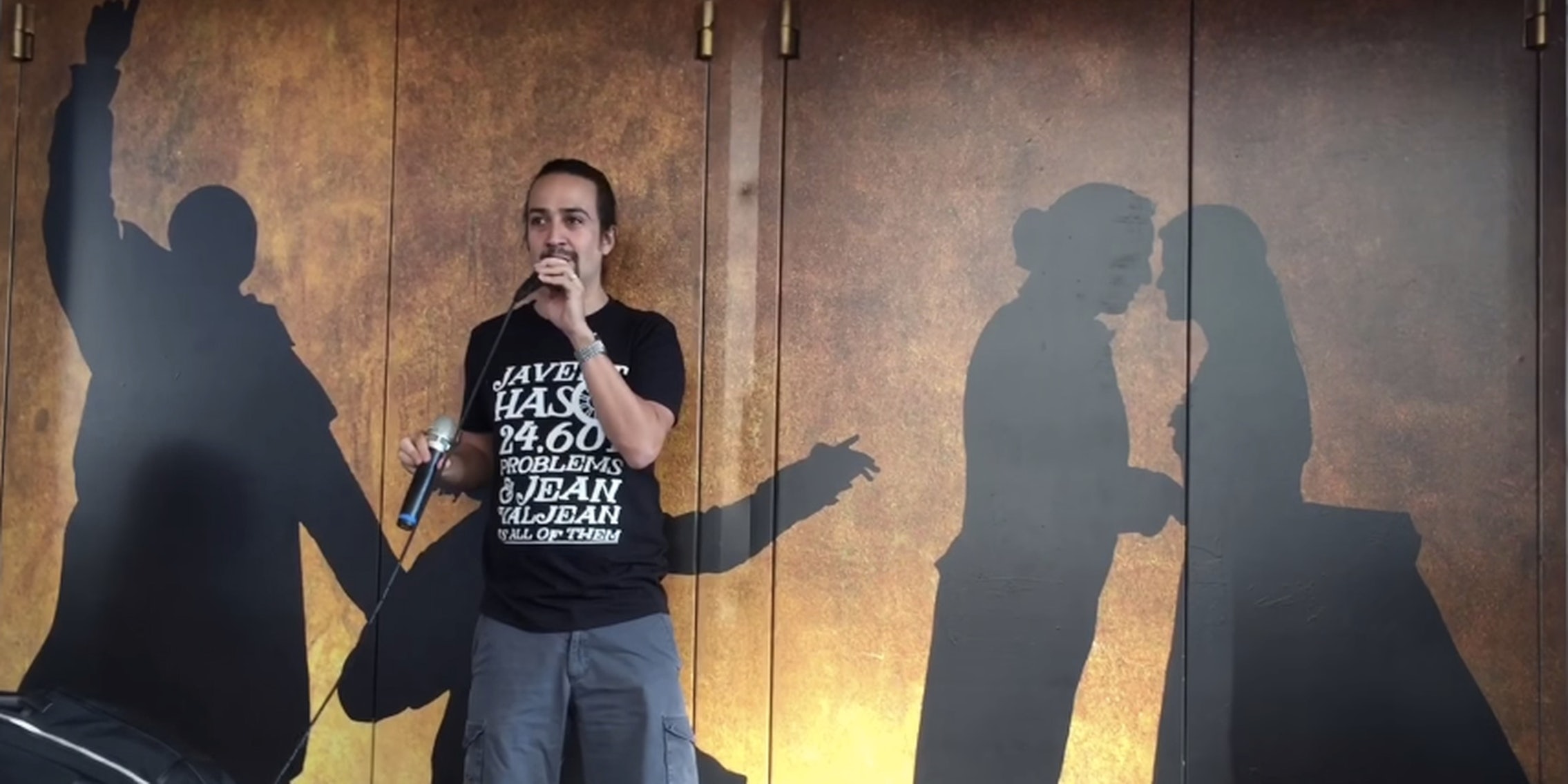 Broadway hit ‘Hamilton’ has a Web win on its hands

Lin-Manuel Miranda takes the Broadway hit to the actual streets of Broadway.

Broadway juggernaut Hamilton is not only revolutionizing the stage; it’s changing how fans interact with and consume the fandom around musical theater.

Unlike other mass-entertainment events, Broadway hasn’t bent to the will of the digital camera. Few musicians enforce recording rules in the age of countless cell phones held aloft from start to finish of a set, but Broadway remains the bastion of no photos, no video, no show. That restriction is only for inside the theater, however, and Lin-Manuel Miranda, the creator and star of Hamilton, found a way to extend the Hamilton experience with #Ham4Ham.

Hamilton, which has won praise from the likes of President Barack Obama and Meryl Streep, booked $10 million in advance sales, meaning that tickets to the show are incredibly scarce. Each night, however, there’s last-minute hope for fans who either can’t afford the high-priced resale market or didn’t plan ahead. Like many other shows, Hamilton offers a lottery to give away limited seats, in their case for only $10 (or, if you will, one crisp Hamilton). With Hamilton’s first lottery drawing a crowd that rivaled the audience inside the theater and the math clearly against the masses, Miranda decided to take the opportunity to talk to the show’s many fans directly. Theatermania captured the inaugural event.

These lotteries are generally handled by a low-level theater employee, equipped with paper slips, a bucket for collecting names, and a megaphone to announce winners. No one is taking video, or sharing it on the Web, but Hamilton and Miranda found a way to make new musical theater moments that can travel.

When you put 500 fans of musical theater together in a high-stakes waiting game, things could get ugly. But the #Ham4Ham preshows are a pure grab bag, with cast and crew members getting involved in the spirited lottery drawings. For example, one night cast member Okieriete Onaodowan sang Wicked’s “Defying Gravity” in the style of Mickey Mouse.

On another, choreographer Andy Blankenbuehler explained how Fred Astaire was an inspiration for his moves and gave a demonstration.

Then there’s the emotional moments. On the official opening night, perched on the concrete steps outside the Richard Rodgers Theatre, Miranda left many attendees in tears as he read from the novel that started the whole project, Alexander Hamilton.

Generally, however, the mood is lighthearted. Standout moments have included a reunion between Miranda and Karen Olivo, who starred in his first hit show, In the Heights, as well as Hamilton star Jonathan Groff, who sings but doesn’t rap as the humorous King George, trying out his wordsmith skills.

Aside from selections that live on the official Hamilton YouTube channel, fans have been quickly uploading and sharing each #Ham4Ham experience on YouTube and livestreaming apps like Periscope.

Most recently, #Ham4Ham collaborated with its Broadway neighbor Les Miserables and brought Kyle Jean-Baptiste, the first black actor to play Valjean on Broadway, out for a duet with Miranda. The pair blew the crowd away with their version of “The Confrontation.”

Hamilton’s neighbors aren’t the only Broadway casts getting in the act. Groff, who starred in the original production of Spring Awakening, welcomed two stars of the upcoming revival to perform at #Ham4Ham this week.

Clearly, each #Ham4Ham show is unique, and it has the crowds coming back even if they can’t get inside the theater to see the actual production. Thanks to YouTube, there’s a lot more #Ham4Ham content in the world than there are performances of the actual show for the world to consume. The Hamilton team didn’t need an innovative marketing campaign to build buzz around the show, but they’re winning at it regardless.

Screengrab via Hamilton the Musical/YouTube