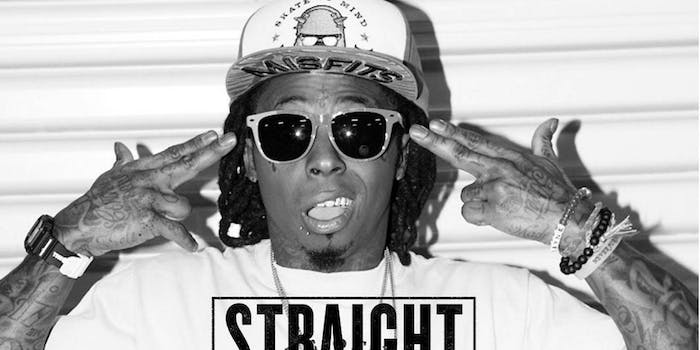 On Tuesday Lil Wayne appeared on Fox Sports 1’s new debate show, Undisputed. In addition to talking about his career and Colin Kaepernick, he stepped into a landmine when he said that “there was no such thing as racism” because “it’s not cool” to younger generations.

At a concert in Westchester, New York, that Wayne claims featured a predominantly white audience, he said he felt beloved—that feeling accepted as an artist was all the proof that he needed that society was beyond racism.

Oftentimes, African-American celebrities have it easier than “normal” African-Americans. Whether it’s playing a sport, performing music, or acting in films, a diverse crowd typically follows them. People of different races are more likely to accept and admire you when you have entertaining talent to offer.

This is why it comes as no surprise that Lil Wayne was blind to racism. As one of America’s hottest rappers, Wayne has fans from all different racial backgrounds. When looking into a crowd and seeing a mix of everyone, it can be easy to think everything is OK in the outside world.

Wayne’s commentary on Undisputed received tons of immediate backlash on Twitter, but the New Orleans rapper is actually making a good point. It is normal for people who cannot relate to racism, and are not affected by it, to think it does not exist.

Wayne mentioned that back when he accidentally shot himself as a boy, a white cop came to his rescue. We also have to consider that the artist became famous at a very young age, joining Cash Money records at 9 years old. Wayne’s apparently never faced institutional racism—and it helps that white males are avid, leading consumers of rap music.

To his credit, after later hearing about the issues that are taking place, he was able to accept that there are problems that need addressing. So really, this is a classic case of taking one incendiary public comment and skewing a celebrity for it without checking out the rest of the interview.

Instead of finding a reason to be angry at Wayne’s commentary, listen to what he is really saying and how it relates to many non-people of color. He’s a strong case study. Educating those who do not deal with racism directly will bring about more change—and just maybe, his inadvertent message will get his white, non-racist fans thinking.