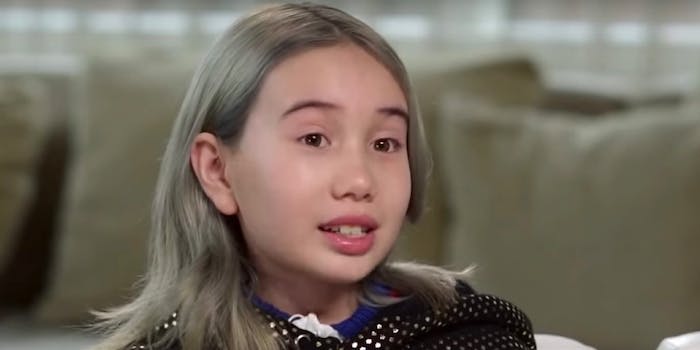 She was recently seen smoking hookah in a Twitter video.

The 9-year-old social media celebrity is famous for worrisome preteen behavior, like cussing out and “flexing” on haters, flashing stacks of money, and pretending to smoke a carrot. But all of her content has been stripped from the social media channels that she’s not even old enough to run, Jezebel reported Sunday.

She was apparently last seen in a now-deleted WorldstarHipHop Twitter video that blurred her face but showed her smoking hookah as her 16-year-old brother and mom look on. The video reignited people on the internet’s demand for protective services to check in on Lil Tay, who recently moved to Los Angeles with her family. Next thing anyone knew, her controversial social media posts—which had gained 2.3 million Instagram followers and 200,000 YouTube subscribers—were gone.

The news begs of the question of how the internet sensation, who’s far from the minimum age of 13 required to run a social media account, got there in the first place. Lil Tay’s Instagram bio had recently been changed to say the account was run by her management, and YouTube told Good Morning America that it would delete an account found out to be run by someone underage.

Her fame—offset by holes punctured in her carefully curated image in recent months—came from both her shock factor and her strategic proximity to other celebrities. The young social media star was seen in an April video of a fight between slightly-older viral teens Bhad Bhabie and WoahhVicky, and she is known to have ties with rappers Lil Pump and Chief Keef.

But people doubted Lil Tay’s legitimacy as the “youngest flexer of the century” all along. It came to light last month that her mom lost her job after using her boss’ car and a client’s penthouse without permission for Lil Tay videos; meanwhile, video surfaced of her brother Jason coaching Lil Tay on how to curse at her followers.

In the Good Morning America interview, the holes in the Lil Tay facade—and the unfortunate exploitation of a young girl—seemed even more obvious. She told the interviewer she “dropped out of Harvard,” but that she “forgot” what city Harvard is in before her mom clarified that the straight-A student is now home schooled.