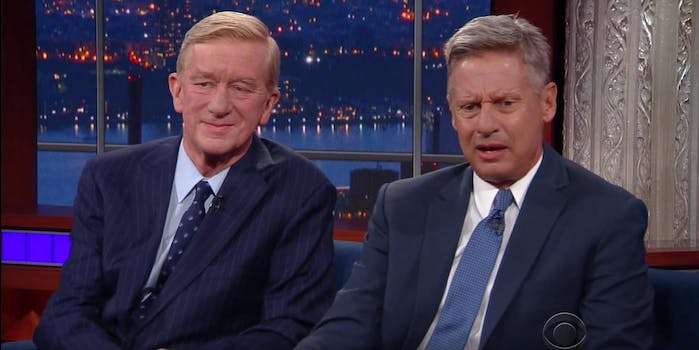 They don't consider themselves 'fringe candidates.'

Last month, the Libertarian Party selected former New Mexico Gov. Gary Johnson and former Massachusetts Gov. Bill Weld for its presidential ticket. Now the two are trying to convince everyone else to take them seriously.

The libertarian ticket chatted with Stephen Colbert on The Late Show and explained the basis of libertarianism. To Johnson and Wild, it meant that they were in favor of small government and were fiscally conservative, like Republicans, but they were more socially liberal, erred on the side of individual choice, and favored medical marijuana long before it became legal in much of the country.

They’ve already gotten the proper American political welcome from Donald Trump, who called them “fringe candidates,” but they don’t necessarily see that as a bad thing.

“I think by ‘fringe,’ I think what he’s saying is that the majority of Americans are fringe, and that’s just not the case,” Johnson said.