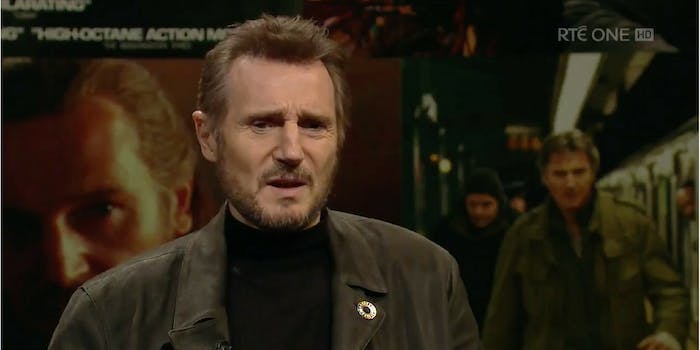 Liam Neeson hasn't taken well to the 'Me Too' reckoning.

Liam Neeson thinks the international “Me Too” reckoning of sexual harassment and assault has turned into a “witch-hunt” that has gone too far, and that its advocates are going after men accused of “childhood stuff” and “touching some girl’s knee, or something.”

In an interview on the Late Late Show on Ireland network RTE, Neeson spoke about the Hollywood and industries-wide shift in addressing and appropriately responding to accounts of sexual assault and harassment. However, to Neeson, these accusations may not be as valid as the recent movement purports.

“There is a bit of a witch-hunt happening,” Neeson said. “There’s some people, famous people, being suddenly accused of touching some girl’s knee, or something, and suddenly they’re getting dropped from their programs.”

Neeson then went on to use the example of Garrison Keillor, the Minnesota Public Radio broadcaster and writer who was fired by the station last year for “inappropriate behavior with an individual who worked with him.” MPR nor the individual detailed the behavior, but according to Keillor, he had mistakenly put his hand up the back of a woman’s shirt when he went to pat her back, and apologized to her about it later. Neeson recounted Keillor’s story on the show as an example of repercussions resulting from the “witch-hunt” atmosphere.

When asked about producer Harvey Weinstein, Kevin Spacey, and Dustin Hoffman, Neeson shrugged off commenting about Weinstein and Spacey, but said he was “on the fence” about Hoffman, calling Hoffman’s alleged behavior “silly things” and “childhood stuff.” Multiple women have said Hoffman has sexually harassed or assaulted them, with one woman saying Hoffman exposed himself to her when she was a minor.

However, Neeson distanced himself from his defense, saying he’s never behaved in Hoffman’s manner.

“But there is a movement happening, and it’s healthy, and it’s across every industry. The focus seems to be on Hollywood at the moment,” Neeson concluded, when prompted by the show’s host Ryan Tubridy that talking about these accusations is “healthy.”

Neeson went on to show his support by talking about what he’s learned through his position as a UNICEF goodwill ambassador regarding the treatment of female workers across farms and ranches.

Watch the segment of Neeson’s interview below: