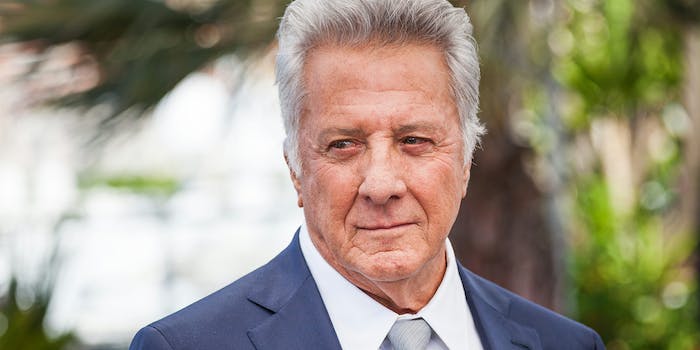 The actor says this behavior is 'not reflective of who I am.'

Two women have come forward with allegations of sexual harassment against Dustin Hoffman.

On Wednesday, writer and producer Wendy Riss Gatsiounis told Variety that in 1991, when she was trying to get her play A Darker Purpose adapted for the screen, she took two meetings with Hoffman and Tootsie writer Murray Schisgal. While the first meeting was mostly professional (she claims Schisgal asked if she had a boyfriend), during the second Hoffman allegedly said, “Before you start, let me ask you one question, Wendy. Have you ever been intimate with a man over 40?” He added that “It would be a whole new body to explore,” and attempted to get her to go to a nearby hotel.

When she declined, Schisgal said they weren’t interested in her play. Schisgal told Variety: “Dustin Hoffman and I took many meetings with writers and playwrights over many years. I have no recollection of this meeting or of any of the behavior or actions described.”

Another woman, Anna Graham Hunter, claims that Hoffman sexually harassed her when she was a 17-year-old production assistant on the TV adaptation of Death of a Salesman. In a column for the Hollywood Reporter, she detailed his behavior on set, which included asking Hunter for foot massages, grabbing her butt, and telling her he wanted a “hard-boiled egg… and a soft-boiled clitoris” for breakfast. She allegedly witnessed Hoffman being inappropriate other production assistants, too:

Today, I realized some things about this business that scare me. First of all, Dustin’s a lech. I’m completely disillusioned. After Tootsie, I thought I wanted to marry him.

Elizabeth asked him what he wanted for lunch and he said, “Your left breast.”

“You pig.” She walked away.

Hoffman responded to Hunter’s allegation, stating: “I have the utmost respect for women and feel terrible that anything I might have done could have put her in an uncomfortable situation. I am sorry. It is not reflective of who I am.”

This news comes the same week that Brett Ratner and Kevin Spacey have been accused of inappropriate behavior.