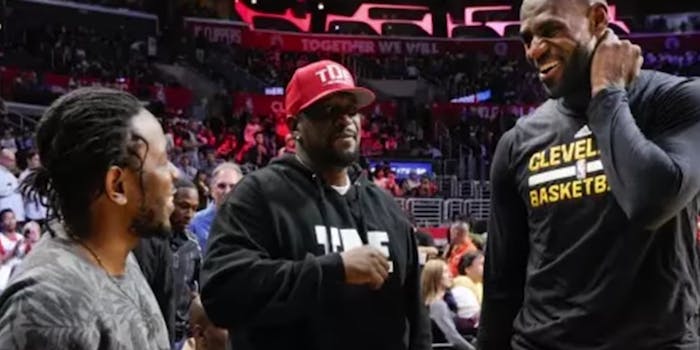 LeBron really loves this Kendrick album—probably too much

On Instagram, James has been bumping and loving the Compton rapper’s third official full-length, 'DAMN.,' which drops tomorrow.

The hype is real, and possibly justified.

In a genius move by Kendrick Lamar and his label TDE, NBA great LeBron James has been bumping and loving the Compton, California, rapper’s third official album, DAMN., which drops Friday. Sure, he kind of leaked some of it by posting his reactions online, but it’s a good look for all involved.

In a series of snippets on his Instagram Stories, James enthusiastically plays album cuts. “ELEMENT” and “LOVE” can be heard. In the first clip, the Cleveland Cavaliers star says, ““Uh oh!! Appreciate the love KDot and Top Dog!” (Top Dawg is TDE CEO Anthony Tiffith.)

James has long been a fan of Lamar’s, and it’s said that James’ requests for unreleased material were at least partial impetus for Lamar’s 2016 surprise drop, the excellent untitled unmastered compilation album of unreleased demos.

It’s clear James has had the album for a while, because he already knows the lyrics, as noticed by many. And the record sounds like a winner.

Lol Lebron had that Kendrick album weeks ago. He already knows all the words

First Drake, now Kendrick. Wouldn't be surprised if Lebron got Jay Electronica, that Jay&Bey album, and Detox on his phone already.

AND HE KNOW THE WORDS.

ITS SETTLED. HES THE GOAT.

Man why is LeBron consistently getting kendrick's projects before us. I need to holla at Top dawg