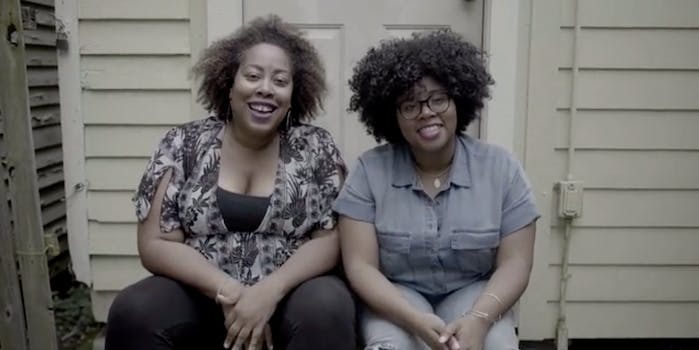 Lauren Domino and Angela Tucker are kickstarting a teen movie—but this one's in color.

It’s easy to fall under the spell of a teen movie. Whether you prefer the hazy romance of Sixteen Candles, the electric last-night-of-high-school vibes of Can’t Hardly Wait, or the cynical wit of Mean Girls, there’s an undeniable magic to these pubescent popcorn flicks. They take us to worlds where crushes can be won over, lives are transformed over night, and there’s no problem so big that the perfect house party can’t fix it.

But something is missing: Where are all the black girls?

Lauren Domino and Angela Tucker have always loved teen movies. But growing up, they never saw girls quite like them in the movies they loved. After years of working in film, the New Orleans-based duo have decided to take matters into their own hands and create the first teen comedy starring black girls: Paper Chase.

When the traditional funding route yielded less than spectacular results, the two turned to Kickstarter, and their campaign has already received attention and support from noteworthy filmmaker Miranda July.

Tucker told the Daily Dot, “[We started the Kickstarter] because obviously we need money for the film but we also feel like there’s a community of people who are really interested in these kinds of stories. This is a great opportunity for us to engage those kinds of people and build community.”

Domino and Tucker are confident that people are hungry for diversity in the kind of feel-good comedies where fumbling friends form alliances, navigate romance, and quest to become cool. And if you’ve always thought of teen movies as trivial, Domino and Tucker are quick to point out the value and importance of such a film starring a black female lead.

“This film is our chance to tell a story that isn’t about poor black girls suffering,” Tucker told the Daily Dot.

Domino added, “If you think about the portrayal of black women on screen, they’re constantly suffering. She’s either a madonna or a whore. You can’t be book-smart and sexually active. [But in reality] you can be both. Black women are multifaceted, and we want to see more of that on screen.

“Our lead character is not a perfect girl… she can be loving, she can be hateful. She’s a three-dimensional person and I think it’s important for a teen girl to see that and feel like ‘Okay, I’m normal.'”

The pair envision the film as a portrait not only of young black women but also of life in post-Katrina New Orleans—the city seen through a lens that renders it neither sensational nor pitiful.

Domino, who was grew up in New Orleans, added, “Seeing New Orleans on camera, it’s always missing the neighborhood I grew up in. You would never think these neighborhoods—predominantly African-American, working-class, tight-knit communities—exist.”

Coming on the heels of yet another all-white Hollywood Reporter actress roundtable, Domino and Tucker are hopeful that their film and the campaign to fund it will contribute to a change in the conversation around black women in film.

Said Tucker, “The thing that’s interesting about the Hollywood Reporter [cover] is we know that they choose [the actresses] and that’s what makes them have Oscar potential.”

There’s no telling how many more all-white actress roundtables we may have to endure, but Domino and Tucker aren’t letting that dissuade them from creating and connecting. The popularity of new shows like Master of None, which foregrounds the experience of immigrants and people of color, make the two feel hopeful that their project will speak to a larger audience.

“It makes me feel like more diverse things are possible,” said Domino. “I think it shows how great your show can be if your writers aren’t all white guys and you just get some other opinions.”

And who knows? Perhaps Paper Chase can start the party that shakes up the seating arrangements at the table.