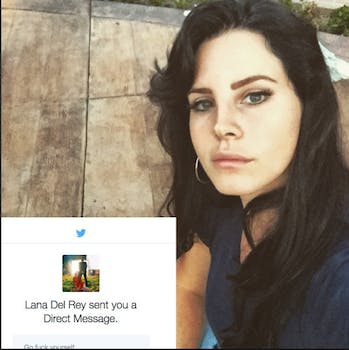 Lana Del Rey DMed Spin magazine, and told it to ‘f**k’ itself

The pop singer direct messaged the publication on Twitter Thursday, instructing it simply to “Go f*ck yourself.” The editors promptly screengrabbed and shared the message:

While Del Rey never gave an explanation for her comments, some simple sleuthing reveals that two hours prior to Spin sharing the DM, it tweeted a piece about how her upcoming interview with Elle UK is “about nothing.” In it writer Anna Gaca calls Del Rey the “queen of using lots of words to be vague.”

Here's a Lana Del Rey interview about nothing https://t.co/XhzRan3TUq pic.twitter.com/woeRSFOjgq

The full interview doesn’t hit newsstands until May 16, but from the promotional blurbs it seems as though Del Rey spends time talking about dropping some of her Hollywood starlet persona and getting more authentic with her music—topics apparently close enough to her heart to defend via DM.

Something tells us this feud has blown over, but the moral remains: Don’t mess with Lana.