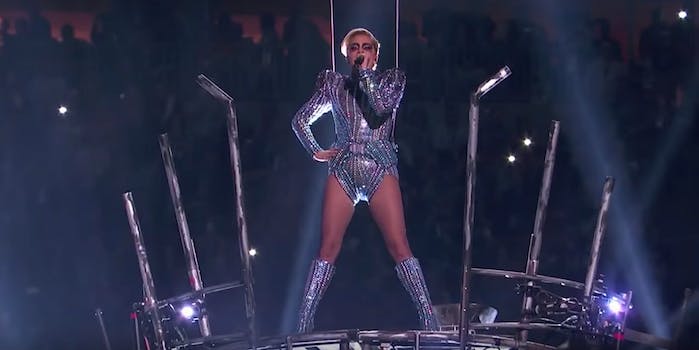 Something about Lady Gaga's performance was very familiar.

Lady Gaga’s Super Bowl halftime show astounded audiences and inspired an assortment of memes, but for some fans, it also looked very familiar because they had already seen it on TV.

Lady Gaga took to the air early on in her performance, but she also did something very similar in the 2012 Simpsons episode “Lisa Goes Gaga.” The pop diva plays herself in the episode, and during her performance in Springfield, she’s raised into the air as she sings to the crowd of adoring fans.

Yes, The Simpsons did it again. (Here’s Lady Gaga’s halftime show for comparison.)

That last still image, of the pink hat Lady Gaga dons on the cover of her latest album Joanne, does recall the hundreds of drones used during her Super Bowl performance, but it’s unclear what episode it originated from.

Although fans have claimed that The Simpsons “predicted” everything from the president to a baseball scandal, that one might be more of a coincidence—and it definitely didn’t predict the Super Bowl outcome as a doctored screengrab claims.

Will the Simpsons be right again about the future? 🤔🏈 #superbowl pic.twitter.com/JSU4sKJ2Iv

Even when Lady Gaga’s performance seemed all but certain, she went and outdid herself.