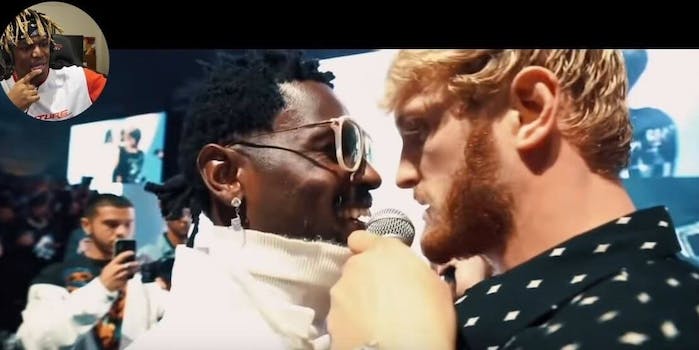 After two boxing matches vs. Logan Paul in a 15-month span, you might be surprised to learn who KSI wants to win a potential fight between Paul and former NFL star Antonio Brown. Turns out, KSI is rooting for his fellow YouTuber.

After Paul lost to KSI in their YouTube boxing extravaganza in November, Paul and Brown—who has seemingly completely sabotaged his football career—began feuding. Earlier this month, Paul dropped a savage diss track on Brown, saying Brown’s “pullout game [is] weak” and that “Mr. Whole Lotta Money [is] going broke.”

While making a YouTube reaction to that song, KSI—who clearly enjoyed the track—discussed why he thinks Paul will beat Brown and why that’s exactly what KSI wants to happen.

“Who do I think will win? Logan, obviously,” KSI said. “Have you seen AB fucking box? He’s stiffer than a fucking piece of wood. He’s got power. I’ll give him that. But he’s so stiff. There’s no fluidity in his movements.

“Logan has fought twice already. Logan feels comfortable in the ring. AB has never boxed in his life and his first fight is going to be with Logan Paul, who is not easy to fight by any means.”

After the streaming successes of KSI vs. Paul—it was the fifth-most watched global event for DAZN in 2019—and Jake Paul vs. AnEsonGib, it seems clear that the Matchroom Boxing promotion company and DAZN are intent on continuing the trend of YouTube fights. That’s why there’s been so much discussion about Logan Paul vs. Brown, even though the contract negotiations have not been completed.

After his victory vs. AnEsonGib, it seems likely Jake Paul and KSI will eventually will face off.

In his video, KSI also ripped Jake Paul’s newest venture—the Financial Freedom Movement, where he wants people to pay him $20 per month so he can teach them how to reach financial independence—saying, “This is the dumbest thing ever. If you want advice about social media, you can just look it up yourself. You don’t have to pay $20 to this piece of shit to learn about advice that is already on the internet. Jake Paul is just trying to take advantage of kids who don’t know any better.”

As far as a future fight with the younger Paul is concerned, KSI said, “It’s coming. Me and his people are talking. Obviously, I’ve got shit to do. I’ve got the music. I have a lot of shit going on. The fight will come in due time.”

First, though, he’d like to see Logan Paul beat up on Brown.

“Obviously, I’m always going to back Team YouTube,” KSI said. “I don’t want AB to win. I don’t know who the fuck AB is.”