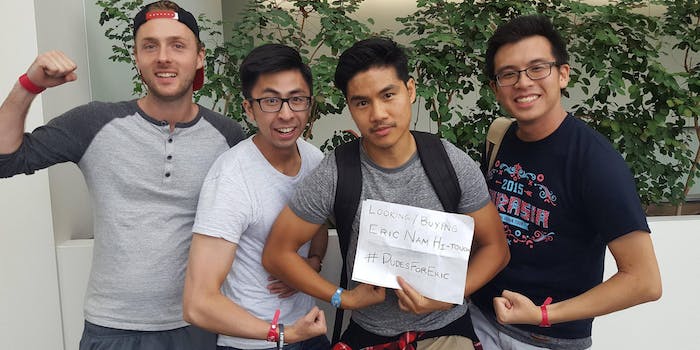 Marching down the hall of the Los Angeles Convention Center, a small group of guys hold a handwritten sign with the hashtag “#DudesForEric” printed at the bottom in all capital letters. Though only a band of four walking against a sea of girls headed toward the convention floor, they make their presence known with wide smiles and enthusiastic yells. They’re searching for audience passes to see the center of their passion, Korean-American solo artist Eric Nam.

The guys showed up in L.A. last weekend for the fifth annual Korean music and culture festival as just a group of fans, but they left KCON as an official fan club. 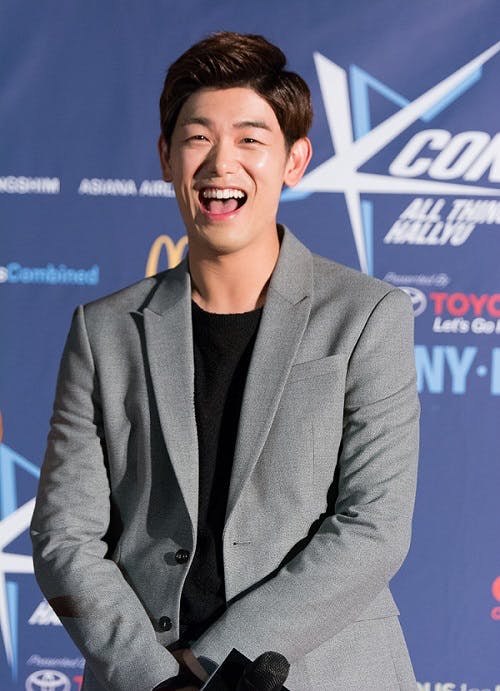 Last year’s KCON sparked the idea of Dudes For Eric, when a few Eric Nam fanboys met up and decided to stick together, since they’re small in numbers. Nam was holding a fan engagement where fans would have the opportunity to stand in the crowd while the singer spoke directly to them—in English no less—while a lucky few would have a chance to “hi-touch,” or high-five, with him. As per KCON policy, you can only attend if you have passes, so the guys dedicated their Sunday to hunting some down. With Eric Nam returning this year, the Dudes For Eric knew they had to do it again, but this time, their cause caught on like wildfire.

One of the original Dudes, Kevin Won, had no idea they’d receive so much support. “Honestly I thought this year would be the same as last year,” he tells the Daily Dot. “Just a normal, ‘Oh let’s cheer for Eric.’ Not this explosion.”

Scores of KCON-goers snapped photos of the group, populating Twitter’s #DudesForEric tag tweet by tweet. The guys were also hard to miss with their blue and orange signs and infectious excitement for Nam. They’d garnered a group of about 15, waiting outside the doors to this year’s engagement, chanting the singer’s name.

Even after the convention, the Dudes saw more and more traction through social media. And considering Nam himself noticed them at his fan event this year, it became apparent that they could be more than just a group of fanboys.

In the days following KCON L.A., the Dudes created a circle of six admins— including Won—and opened official fan pages across social media platforms, such as Twitter, Facebook, and Instagram. After seeing Nam at the fan engagement and in concert, the Dudes shifted their goals and set their sights even higher.

“Originally all we wanted to do was really make Eric laugh and smile because that’s what he has done for us over the years,” admin Nate Whitten explains. “We got him to do that, but now we have bigger goals in supporting his causes and his music.”

Nam showcased some of his endeavors through his performance at KCON L.A. During his set, he performed his first U.S. track “Into You” and invited Kolaj (the artist he collaborated with) onstage to perform with him. Between songs he also announced he had just become an official ambassador for Better Life, Better Future, a charity through UNESCO dedicated to providing education for women around the world.

As a growing fan base, the Dudes hope to gain some clout and use it to back their idol in his charitable acts. To do so, they’re working on getting some merchandise and an official logo, Whitten says. The Dudes are looking to host a booth at next year’s KCON too.

Aside from that, the Dudes stress the importance and existence of men in K-pop, as it’s rare to find males in the K-pop fandom. (And it’s even rarer to find males who are fans of male artists.) They definitely notice that they’re surrounded by so many girls and women.

“Where are the guys?” Whitten asks, recounting the demographic at Nam’s fan meet. “We better band them together. We better come as a group and be strong together for Eric.”

After all, Nam’s a cool guy, Won stresses. “There is literally no reason to hate him.”