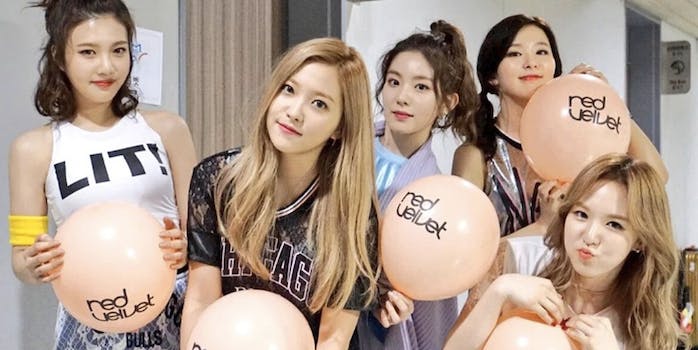 Now, can we get a fandom name, please?

Every Korean pop band longs for the day that marks its success as a group of idols—the day its fandom grows large enough to warrant a name and an official color. It’s a mark of success in the Korean entertainment world, a sort of confirmation that a group is on the road to greatness.

Now, the adorable K-pop girl group Red Velvet has become the latest band to receive this honor. The group announced that its official color is coral pink.

One might wonder why this is such a big deal, or why a band’s official color or fandom name matters so much. In Korea, fans rely heavily on the pride of being part of a fandom; being able to represent your favorite band’s official color by wearing the right color t-shirt or holding a light stick is very important. It’s common to see seas of color at concerts as fans unite by holding up their band’s color of choice.

Not all bands participate in this tradition, but most popular bands do have a fandom name. Now Red Velvet has to choose its name, which is just as big of a deal for it as its color.

Fandom names help a group’s fans find each other on message boards, on Twitter, and even in person. It’s easy to make a friend in a K-pop community by realizing you are fellow members of the same fandom.

Red Velvet has seen continuous success since its 2014 debut, so it seems like the right time for the group to celebrate. Not only are they precious, but they favor talent and fun over the blatant sexuality that has seeped into the identities of so many other girl groups.

Now let’s hope these girls don’t have to wait six years like f(x) did before coming up with a fandom name. Get on it, SM!