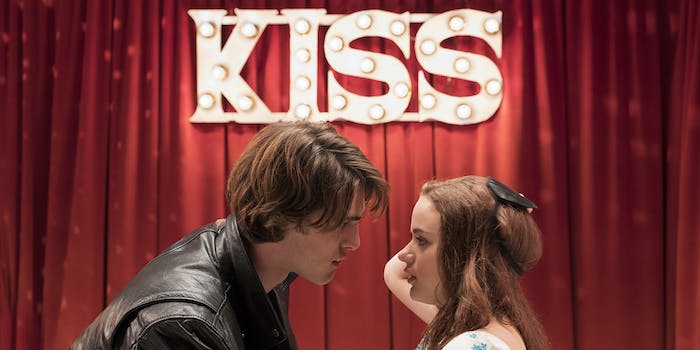 The movie focuses on the female body—and not on women's power of choice.

Let’s get something straight: The Kissing Booth is not a romantic comedy.

The Netflix original film, based on the best-selling novel by Beth Reekles, is better described as a coming-of-age film and should be treated as such. While the movie, which stars Joey King as the pubescent Elle Evans, has all the right ingredients to be a rom-com for teens—a trio of mean-girl villains, the elusive bad boy, and the life-long best friend who seems to get in the way of true romance—its troubling treatment of the female body and unrealistic representation of high school hinders its ability to accomplish anything meaningful.

It follows Elle Evans as she begins her junior year of high school in Los Angeles, alongside her best friend, Lee Flynn (Joel Courtney). Over the summer, Elle has gone through puberty and on her first day of school—when, of course, only a tiny skirt is available in her closet to wear—boys take notice, to the dismay of Lee’s older brother, Noah (Jacob Elordi) who tells every boy in school to stay away from her because he wants to “protect” her.

His true motives shine through when Elle hosts a kissing booth as a school fundraiser with Lee, and she ends up kissing her secret, life-long crush Noah. Because Lee and Elle have sworn as best friends to never date each other’s relatives, Elle and Noah keep their relationship a secret. And thus begins a film centered around the growth spurt of a teenage girl’s breasts, in which every male motive propels the plot forward in an attempt to either protect, focus on, or attain the right to have Elle’s body.

Upon deciding to watch the film, it’s important to understand that it’s for a teenage audience, so awkward acting, cheesy lines, and clunky scenes between teens should be expected. The “OMG Girls” are the most unbearable characters to endure but are also unfortunately realistic. Molly Ringwald, who plays the mother of Lee and Noah, provides the best, most digestible acting throughout the entire film. Teen flicks usually make adults cringe—and this one is especially unwatchable if you’re not into the genre.

Almost every scene in The Kissing Booth finds a way to be about Elle’s body or the right to make decisions about her body, and the two lead male characters stay fixated on that theme for the entire film. Noah, especially—who has no redeeming features except a six-pack—both unhealthily and ironically protects Elle from the male gaze, even though he’d been a womanizer up until she developed breasts. At the beginning of the film—after he gets in a fight with a classmate who’s slapped Elle’s butt—he tells Elle that she both dresses herself in a way that’s “asking for it” and is “too naive” to understand the dating world. Then he dates her and exploits that lack of experience. Lee, meanwhile, gets angry when he discovers their relationship, not because he thinks Elle deserves better or because he has feelings for her, but because he’s tired of his brother getting “everything” he wants and wants to keep her to himself. (Note that Elle is considered as a “thing.”)

There’s also an intense amount of underage drinking throughout the film. Elle, who’s a 16-year-old, at one point gets so intoxicated at a party that she climbs on top of a table and strips most of her clothes—to the enjoyment of the mostly male partygoers.

The film lacks progressive and realistic expectations of teenage relationships and sex. Elle, who’d never been kissed before her showdown with Noah at the kissing booth, very quickly launches into intercourse with him without covering some pretty important bases—both the sexual kind and the safety kind. (She knew he was a player but never once asked him if he’d been tested for STDs.) There’s an ongoing, blink-and-you-miss-it subplot about a gay romance between two classmates that is never addressed: In 2018, it’s disappointing to see that’s the best LGBTQ representation a film can boast.

The Kissing Booth had great potential to be a body-positive, coming-of-age film, where a young woman learns about her autonomy and to not allow the men in her life to police her body. Instead, the film plays far more into sexist undertones and allows Lee and Noah to commodify Elle’s body, turning her into a thing to fight for ownership over rather than a person who’s allowed to make her own decisions.