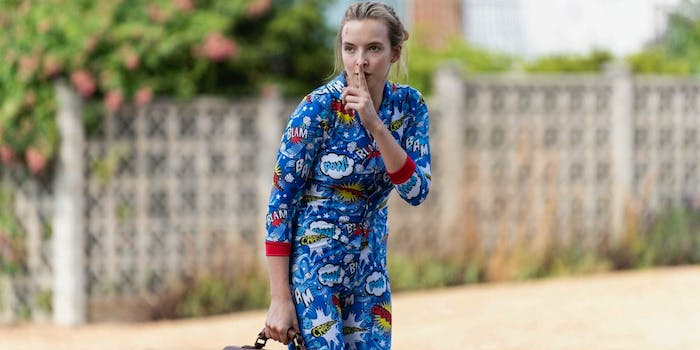 Is Villanelle the only psychopath in ‘Killing Eve?’

'A sociopath wouldn’t survive a week in Villanelle’s job.'

Prepare to be showered in blood. Eight new episodes of Killing Eve begin airing this month and that thump you just heard was the sound of people falling over themselves in anticipation. Delivering a funnier and more feminized take on the traditional thriller, season 1 was addicting and audiences couldn’t tear themselves away from their screens as Eve and Villanelle yo-yoed between kiss and kill, murder and meet-cute.

But this season will prove a new start to the series. Creator Phoebe Waller-Bridge is focusing on other projects and new Executive Producer Emerald Fennell describes the upcoming episodes as “intimate and darker.” She tells Entertainment Weekly, “What happened at the end of season 1 has really, really made an impact on both of our protagonists. It’s a ripple effect that both of them have experienced.”

It may be tricky to top last season for intimacy and darkness, though. When we last saw Villanelle, she was reckoning with her recent stabbing at Eve’s hands. Most people would consider attempted murder a legitimate reason to pull the plug on a potential relationship. Villanelle, however, is not most people and now the question remains how will she respond? Will she want revenge on Eve or, as actress Jodie Comer suggests, will this “make her believe that they have a very special relationship?”

And if Eve and Villanelle do have a very special relationship, what exactly will that look like and who will emerge alive? We spoke with two experts to find out more about what’s drawing these characters together and how their bond might evolve throughout season 2.

Dr. Ashley Watts is a postdoctoral fellow in the psychological sciences department at the University of Missouri, as well as a fan of the show. This makes her the perfect person to speculate about whether or not Eve and Villanelle have a future together—romantic or otherwise.

Dr. Watts believes Villanelle is “pretty clearly psychopathic,” but she doesn’t dismiss the idea that she could eventually settle down if the right person came along. “It might be that they draw on a different set of values in terms of what constitutes a long-term relationship or a high-quality long-term relationship, but psychopathic people are very capable of being in romantic relationships,” she tells the Daily Dot.

Villanelle’s obsession with Eve raises the show’s emotional and narrative stakes, but psychologically speaking, it also provides insight into Eve’s character. When Dr. Watts was with Emory University, she led a study that concluded that people with higher levels of psychopathic traits tend to be attracted to those who share elevated levels of those same characteristics.

Villanelle’s fascination with Eve may have started because of her hair and the memories it triggers. But the fixation likely persists because she recognizes in Eve pieces of herself—someone who is similarly willing to bend and break the rules, subvert authority, and pursue her own agenda.

I float the “Villanelle loves Eve because she’s also a psychopath” theory by Dr. Watts, who thinks it’s interesting but points out that we haven’t seen enough of Eve to make a determination either way. She acknowledges that Eve does display some psychopathic characteristics, like boldness, adventurousness, and impulsivity, but she stresses that so far, Eve has not shown any signs of antisocial behavior, which is necessary to make a diagnosis.

We don’t know enough about Eve to predict whether she’ll leave her husband Niko to pursue a romantic tryst with Villanelle. But what we do know is the events in season 1 have had a significant impact on her psyche, shifting her from a British intelligence officer traumatized by all the violence she encounters to an emotionally callused person who is becoming desensitized to the murders she’s trying to prevent. As Eve evolves, she’s shifting closer to Villanelle, which in this case, might have the added benefit of increasing Villanelle’s interest in and attraction to her.

Dr. Watts can envision a scenario in which Villanelle romantically pursues Eve, but when it comes to Eve’s response, she’s skeptical that the affection will be reciprocated long-term. Dr. Watts thinks it’s more likely that Eve’s fascination with Villanelle is actually misplaced envy for the freedom she has to do her work without interference from bureaucracy. “She strikes me as an unconventional person who’s led a very conventional life,” she says.

Either way, she’s not betting against the idea that the two could eventually team up. “You can come back to me in a season and I might have a totally different opinion.”

How many psychopaths are actually in this show?

“You should never tell a psychopath they’re a psychopath.” Villanelle posits in season 1. “It upsets them.”

There’s a reason Killing Eve scooped up 14 BAFTA nominations this year. Creating a character like Villanelle—someone who is both charming and chilling, capable of capturing your heart even as she’s tearing it out of your rib cage—is a big ask.

In order for audiences to invest in the ever-changing relationship between Eve and Villanelle, the show has to make Villanelle believable as a psychopath without diminishing the audience’s capacity to root for her.

Dr. Watts describes Villanelle as a “unicorn,” explaining that “she’s an amalgam of characteristics that do not all occur in people. She’s highly intelligent, she’s self-aware and pretty funny, but she’s also psychopathic, which is more rare for a woman, and she’s attractive.”

But is she actually a psychopath? It’s clear the show intends for her to be received as such and Villanelle herself identifies as one. But coverage surrounding the show is split, with many writers describing her behavior as sociopathic instead.

While adapting Killing Eve from Luke Jennings’ Villanelle book series, Phoebe Waller-Bridge and her team consulted with Dr. Mark Freestone, senior lecturer in psychiatry at the Queen Mary University of London. He diagnoses Villanelle as being a “primary psychopath,” as exemplified by her impulsivity, lack of remorse, duplicitousness, and aggression.

Science and psychiatry define psychopathy differently, however, and Dr. Peter Jonason, senior lecturer at Western Sydney University, worries that this diagnosis may be inaccurate. “The trouble is,” he tells the Daily Dot, “people throw this word around very liberally and inappropriately.”

Jonason hasn’t seen the show, but he says that Villanelle’s work as an assassin makes him suspect she’s more likely a sociopath or someone who would test highly for Machiavellianism. He explains that the trick in distinguishing between psychopaths and sociopaths is that sociopaths are able to engage in long-term planning, whereas psychopaths usually fall victim to their own dysfunctional impulsivity.

As an assassin, Villanelle frequently engages in tactical thinking—murdering someone with a poisoned perfume bottle requires a certain level of proactivity and dispassionate strategy, which would point to a more sociopathic person. But Dr. Firestone asserts that while primary psychopaths are uncommon, they “can use violence and aggression in an instrumental or calculating way, rather than in anger or self-defense.”

He adds, “A sociopath wouldn’t survive a week in Villanelle’s job.”

Dr. Jonason remains unconvinced of Villanelle’s psychopathy, but he points to new research that might explain her willingness to resort to violence. He recently submitted a paper that is currently under review, examining how psychopathy becomes increasingly crucial for survival in dangerous places. If accepted, the data will demonstrate that people living in locations where survival is more competitive might test higher on the Dark Triad, a term experts use to refer to three malevolent traits: psychopathy, narcissism, and Machiavellianism.

Dr. Jonason explains, “I live in Australia, which is the 13th safest country in the world. Being a psychopath doesn’t have much payoff in this survival game. But if you’re living in a place like Turkey, then it becomes more useful.”

The 2018 Global Peace Index lists Turkey as the 149th safest country in the world. Russia, where Villanelle was born and suffered through an injurious childhood, is ranked 154th. Dr. Jonason theorizes that “a woman who is quite attractive, coupled with a difficult environment, should by logic alone lead to a Machiavellian person.”

Determining whether Villanelle is a calculating psychopath or a sociopath who enjoys murder matters when hypothesizing about her potential future with Eve. Like sexuality, psychopathy exists on a continuum and Dr. Jonason believes the two have a better chance at relationship satisfaction if Villanelle leans more toward sociopathy than psychopathy. However, he cautions that sociopathic relationships struggle because “these are people who need excitement, so the stability offered by monogamy is monotonous.”

People who test highly for Machiavellianism are also less sex-focused than people with high psychopathy scores, so Dr. Jonason cautions that if Villanelle is indeed a sociopath and she and Eve do end up together, the relationship may function more as a platonic partnership.

This may prove disappointing to viewers who have spent the last year composing Eve and Villanelle fan fiction, but at this time, there’s no guarantee or even indication that Eve and Villanelle will run off into the sunset together. Of course, the only way to know for sure is to tune in and see where April’s blood showers take us. If the early reviews are to be trusted, this season promises to be as captivating as the last.

Ilana Gordon hails from Connecticut but currently lives in a state of continuous panic. At night she performs standup all across the U.S. and internationally at the Edinburgh Fringe Festival. By day she works as an associate producer for 'Daily Pop' on E! She is usually very tired. Ilana's writing has been featured in places like: the A.V. Club, the Takeout, Atlas Obscura, Huffington Post, McSweeney's Internet Tendency, the Belladonna Comedy, Reductress, Mashable, the Second City Network, RedEye Chicago, ART + marketing, the Muse, Dose and OMGFacts. Follow her on Twitter: ilanaabby