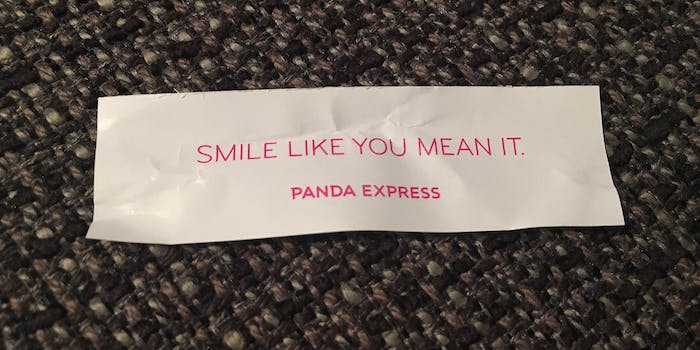 The Killers-Panda Express Twitter beef has a happy ending

Look on the bright side.

A tweet from Panda Express had the Killers coming out of their cage last week, but it appears the online incident has a happy ending.

It all started last week when the Las Vegas group tweeted out a photo of a fortune cookie allegedly from Panda Express that read “smile like you mean it.” This could apparently only be a reference to the group’s 2004 single of the same name and nothing else.

Royalties, the band was thinking.

I'm thinkin' orange chicken for life and we'll let you off the hook for using our stuff. pic.twitter.com/3gJ9FebZVD

While orange chicken for life sounds like a stiff sentence, Panda Express pivoted and a potential beef was averted.

Thanks to a fortune cookie, the Vegas nonprofit Serving Our Kids will get some assistance.

A BIG thank you to @thekillers for recognizing a need for young children in the Vegas Valley! We are grateful for the support! @pandaexpress

According to the Las Vegas Review-Journal, the donation really did happen. Executive director Dale Darcas told the Journal that the charity is “just appreciative of it and grateful that it happened. We’ll be able to grow and not have to worry as much about where we’re going to get our food and how we’re going to be able to take care of the kids.”

Specifics of the donation were not disclosed.