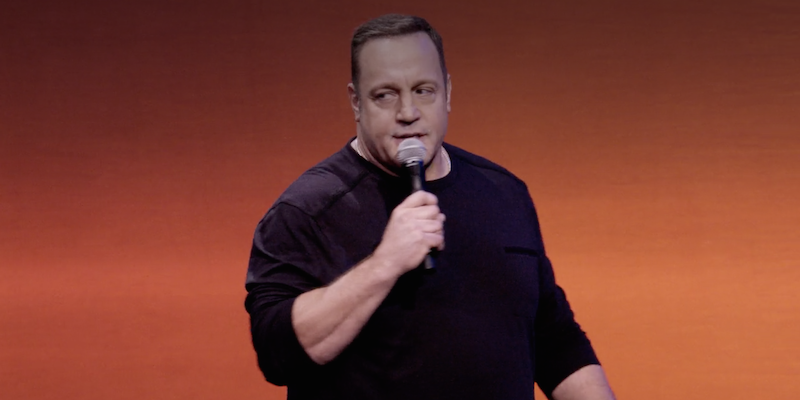 Kevin James grapples with masculinity in ‘Never Don’t Give Up’

OK, who told him about gluten?

Kevin James isn’t exactly known as a standup after the success of his sitcoms Kevin Can Wait and The King of Queens, but in his new one-hour special for Netflix, the comedian is hoping to prove that he still has his chops. Like the characters on his shows, James is at a place in his life where he’s grappling with working and being a dad at the same time. The main difference is that he happens to be rich. The subject matter is definitely what you’d expect from a friend-of-Adam-Sandler in 2018: colonoscopies, pedicures, and “what’s the deal with food allergies?” all make appearances. But the 60-minute show is at its best when James is exploring his need to project macho confidence—when he suspects that he doesn’t actually have very much macho confidence, to begin with.

Let’s start with the problems: This comedy is broad. The same thing that makes James a super successful sitcom star is what makes him a safe standup. His material is incredibly relatable—so relatable at times that it verges on white noise. In one joke that takes place at a birthday party, his young daughter remarks that the cake “tastes like beer.” James quips that he now needs to a) reassure all the parents that his 4-year-old has never tasted alcohol, and then b) get his hands on that cake. Because he likes beer. Get it?  The punchlines often rely on James’ physical comedy to get laughs out of the audience, but in his defense, his audience does laugh. A lot. During a segment about tattoos, James does some crowd work and seems oddly more in-his-element than he does elsewhere in the special. He lands on one gentleman who explains he has a tattoo of the Looney Toon Taz and another of a clown in a straight jacket, and James is right at home as he questions the guy’s judgment.

“You were in Maui? You were a little high?” James laughs at one point. “Now it’s starting to make sense… You could have stopped at Maui. I was good.”

There’s a care and nostalgia for a certain kind of masculinity that’s still very much alive in James’ work. Sometimes, it has trouble landing. Like with a bit about lactose intolerance, where James asks, “If you’re a man and you’re lactose intolerant, why would you ever bring that up to another man? …Where are the men? Where have they gone?” The audience in the theater is laughing with him, but a worldwide Netflix viewership will undoubtedly have some comments about that line of thinking. There’s a certain degree to which James’ work has evolved with the times—like when he suggests everyone try getting pedicures, because if someone had told him it was just someone “trimming your toenails” he’d have done it a lot sooner. But for the most part, he seems a little bewildered by the culture around him, and perhaps a little unwilling to get on board.

Other times, like in a joke about a family trip to a theme park, that uptightness works a little better. James tells a story about trying his best not to puke on the swinging pirate ship because he wants so badly for his son to have fond memories of the day. He ultimately cares what his son thinks of him and wants to be A Good Dad in 2018, whatever that is. You can understand why TV and movies have ended up being his lane of choice, though—the dude thrives in scenario-building.

Overall, the special is mostly benign, flaccid comedy that probably would have felt a little more at home in 1995. But it may very well be worth recommending to a certain kind of father in your life.