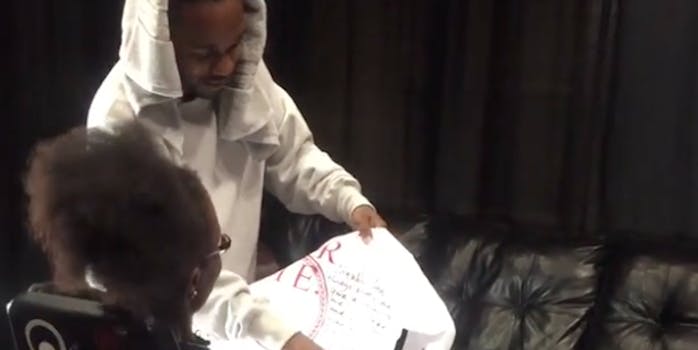 During a show in Dallas over the weekend, the rapper noticed Jennifer Phillips (who uses a wheelchair) in the crowd and invited her backstage to hang out after the concert. He signed merch for her, posed for pics, and just generally treated her to a surprise VIP experience—enough for the story to get some viral traction.

What some bloggers didn’t realize was that Lamar’s autograph contained a touching message. Phillips has been working to raise money for a van that can accommodate her wheelchair, and unbeknownst to her, Lamar decided her fundraising was over—he offered to pay for the van outright.

In Sharpie on a jacket, the rapper (who has the best-selling album of 2017 right now) wrote:

Thank you for always supporting me. Your a [sic] inspiration for me. You are strong and positive. Your kind and beautiful. For all the years of inspiring me, the least I can do is make sure your comfortable driving the city. A gift from me to you. Your always appreciated!!!

He then handed her the shirt and asked her to read it. Needless to say, the gesture was life-changing for Phillips, who has been a quadriplegic since 2007.

So about last night… lol. If you know me or even just look in my Instagram profile for two minutes then you know I am a huge Kendrick Lamar and TDE fan/supporter for YEARS. I've been to every show Kendrick has had in Dallas including the first one that even he forgot about lol and one in Austin. That's 8 shows and not including the other TDE artists shows. I was a big fan of music and concerts before my injury but I never supported and loved a label like theirs before. Of course they have great music but they are also great people. None of them have ever treated me like a stranger or a charity case lol. I didn't meet them because I'm in a wheelchair. I just know great people (shout out to @bluethegreat for the initial in person introduction to Dot & Q). I never supported them for any benefits like this lol. Their music and shows were enough for me. But this is amazing and I thank you from the bottom of my heart. I love you all and always will. Thank God for you Kendrick and I will continue to pray for you. And like I said, next time I'm driving myself to your show lol. Thanks to the whole team! #tde

After a few days of media coverage, Phillips noticed writers were leaving out the best part of the story (ie: the van), so she hopped on Twitter Monday asking that everyone, “Give him some props pls”—because fandom never sleeps, people.

Hi, I'm "Disabled Fan" lol what you missed is that the autographed jacket said he was buying me a new wheelchair van. Give him his props pls https://t.co/Y83vtJAdRW

It doesn’t get better than this.